I braided the hair of each of the bridesmaids, ending with the little flower girls’ hair because the restless toddlers couldn’t sit long enough through all the big-day commotion. Their pearl crowns now pinned in perfect place, they each sat trusting me, for the first five seconds. The crowded house seemed to get louder with anxiousness. I bobbed back and forth through the chaotic to-do list, easing my own jitters by sipping my acceptable mid-morning wine. My auntie entered the disorder from a bedroom in all white, she was beaming a radiant light that the room stopped to notice, but her voice shook as she held her phone. Already, she was the center of attention we orbited around—or was it a pause because the bride upholds all required attention, at all times. We grew silent. She started again, gaining clarity through her soft tears, she shared a lovely text message just received from her son.

He wished he could be there and was so sorry he wasn’t able to see her beauty or walk her down the aisle on her special day. Jimmy was called out to a wildfire in Utah at 3:00 a.m. that day. I could imagine him justifying missing his mom’s wedding, “Firefighters never hesitate. They run into extremely dangerous situations to fight fires and save people, and when another community anywhere in the country needs their help, they pack up their gear and head out with no questions asked.” I could imagine him in the van filled with other anxious young men ready for another adventure, sick of our small rural reservation. An escape to prove themselves, to see the world, to live in the dirt, to taste the heat, to feel exhaustion but solely in the body for once. A thrill that kept him going back every summer, those same boys. The boys of hurt, the ones in need, the misfits who couldn’t hold regular jobs, but who claimed this temporary summer was their job all year long. The paycheck was the incentive at first, but in reality, it was the sense of belonging they wholeheartedly needed. Jimmy needed. Those trips saved Jimmy. The money was quick, but not at all easy. I call it the substitute from their usual, but highly volatile, alternative economies. These economies are sometimes the only option, the alternative to the broken systems meant for our erasure. We call it generating income, some call it drug dealing. Either way, the result is that most of those young men in the van were used fast pay and high risk. I praise the crew managers for allowing lost souls to escape static, trapping environments and letting them live liberated together for a month on the road at a time.

The ceremony was near, I was helping with a last-minute highlight, reapplying more or less cream blush. We choked on hairspray, sipping more wine and beer to soothe the nervous tensions. I was the last to be ready; the bridal crew departed, leaving me behind while I applied my finishing touches of peach shadows, my hands shaking applying my matte liquid wings. The silk primer, the ivory foundation, and the powder setting, cannot forget the setting.

Then, the world went blurry, the bride was limp, numb to the news outside the reception hall. Everyone running out to her aid, to be a part of the truth. The alcohol that was plateauing in me did not alleviate the pain I saw and couldn’t digest. Everyone’s shock was a slight buzz, a cloud that dropped everyone to their knees. The disbelief traumatized everyone around me, I couldn’t hear anything anymore but the prolonged buzzing. His sister, my sister, screamed out, “he is gone.” She sharply snapped, yelling at my optimistic skepticism. A split-second expression where I begged her it wasn’t true, a deep longing that maybe someone was lying or there was miscommunication. She wanted to punch me with the truth, straight in the face. She could have and I still wouldn’t have listened.

The police arrived to confirm.

The trauma of that evening broke my whole family, broke my community. The firefighters left Michigan and never made it outside of Minnesota. The driver of Jimmy’s van admitted to using cocaine three days straight and only he had slept forty-five minutes out of the last seventy-two hours before the crash. The driver fell asleep at the wheel and woke up as the truck veered into the next lane. Of the two crews that left early morning, over half of the boys in that van faced addiction, including Jimmy.

Two and a half years have gone by, and there is not a day when I don’t think of Jimmy, James Frederick Shelifoe, Jr. Every day is a reminder of when the world stopped; a sinister hint in the weeks after, confronted with the presence of a being who no longer existed; a reoccurring yearning the months after, where every meal around a table meant Jimmy wasn’t there.

I still dream of a video on Snapchat, where the story only lasts twenty-four hours before being deleted forever. On the day before the wedding, at the rehearsal dinner, I captured a short clip of Jimmy trying desperately to get the little flower girls, his daughter and our niece, down the aisle. The music starts announcing their turn and I can see his smile so vividly. Then his impulsive nature turning so quickly as he snapped for a brief moment at the little babies. His patience wore thin as they danced instead of throwing their pink petals. His sweet yet stern determination didn’t affect their play. He was always happy but under his guise of happiness were scars of anger. Seconds seized every memory we held of Jimmy. His gentle need to help everyone he came across, his vibrant fantastic stories, his stubbornness to defeat, the protective bear, the easily passionate, and amazing father we knew.

Fuck, am I mad. I couldn’t remember to press save. Why couldn’t I just have pressed that tiny little button? I would give anything to see that cool summer August evening again, that last time I saw him.

The young men on those trips were in pain to begin with; it is hard to leave your issues behind anywhere you go—you can’t hide, run, or numb them. The firefighters carried that extra baggage in their already twenty-plus-pound sacks on each and every trip. Their backpacks held their survival gear doubled in the weight of their historical heartaches, with their generational trauma in tow. Jimmy, twenty-three years young, carried triple the pounds, which came from the hardships our grandparents faced in boarding schools. The tonnage equaled the abuse that was passed on from my grandpa to his nine children, the terror brought into a home where alcohol made monsters. The heavy of the suicide of my Grandma who left my aunts and uncles to fend on their own. The mass of heartbreak and hurt my mother’s generation carried on to Jimmy and me. The normalization of incarceration, abuse, drugs, and hurt was thick and deeply ingrained. The pressure didn’t start with my grandparents, but that’s as far back as I can see, as far back as I witnessed in my lifetime. Like the prolonged buzz that doesn’t go away, like the snap that didn’t save, like the baggage of added weight, just in being Native. 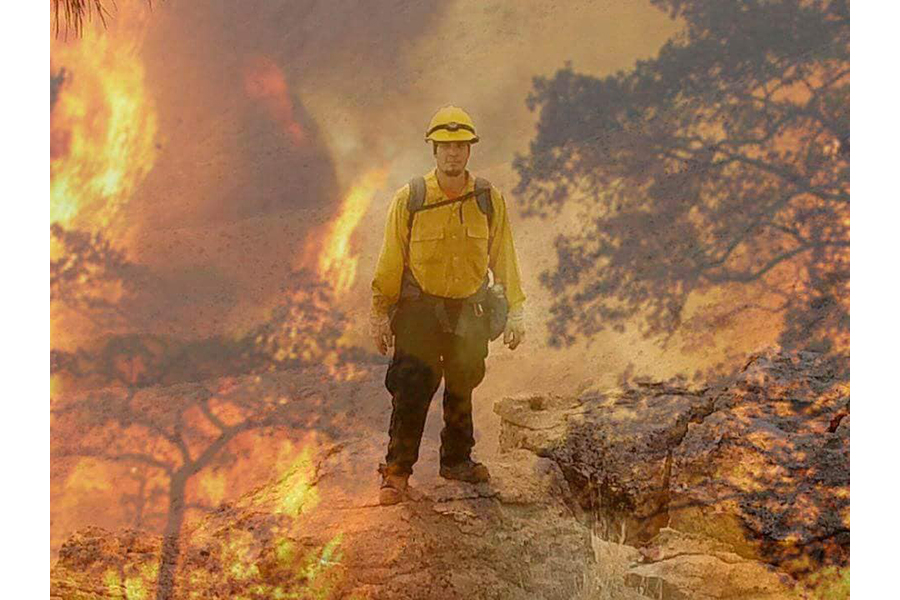 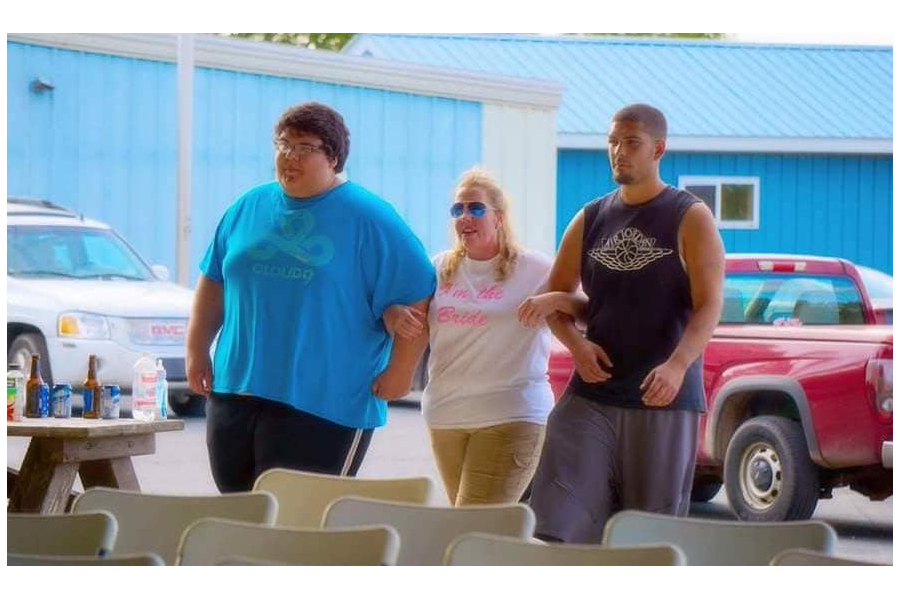 My aunt Sherrie, with her two sons, Jordan and Jimmy, at her wedding rehearsal. 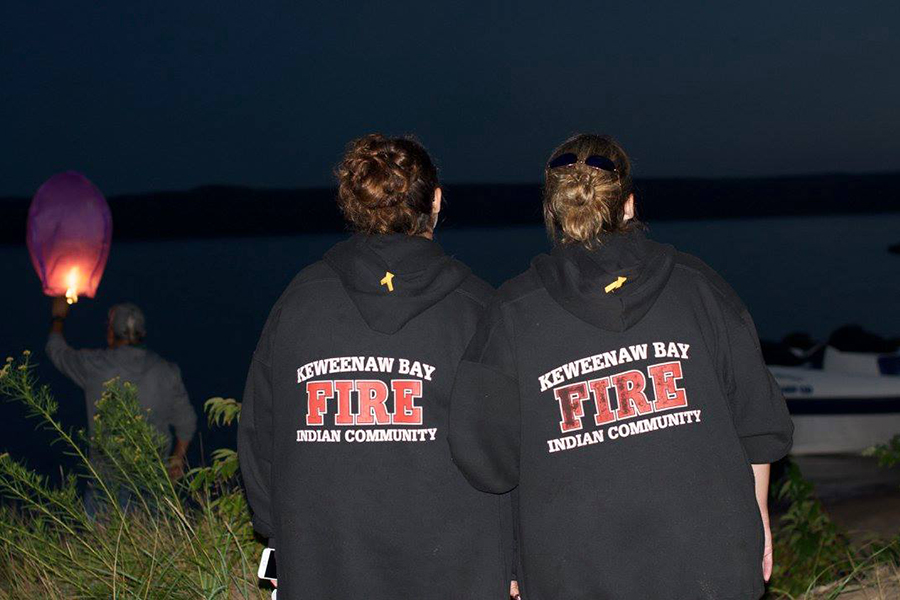 My aunt Sherrie and her daughter Ginger at the candlelight vigil for Jimmy and the Keweenaw Bay Beartown Fire Fighters. 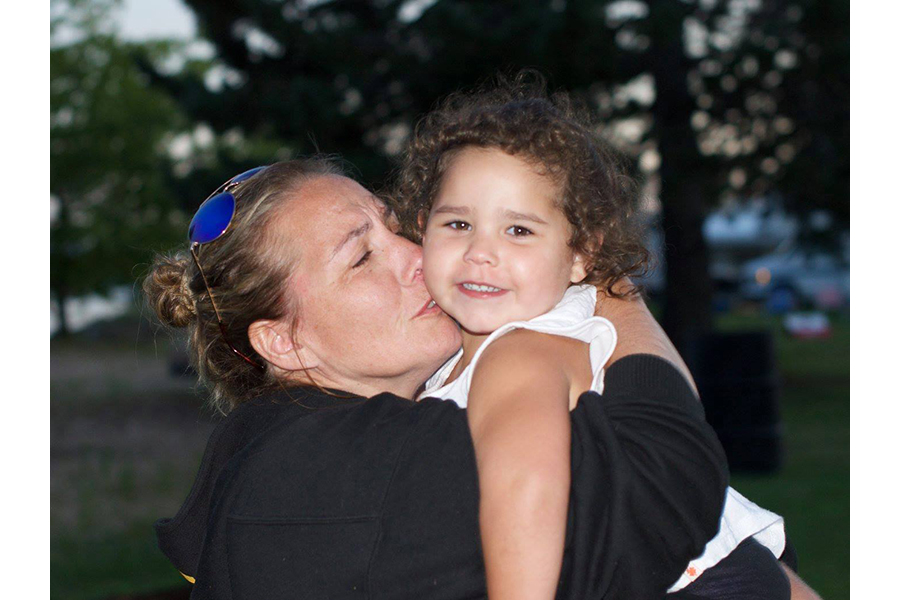 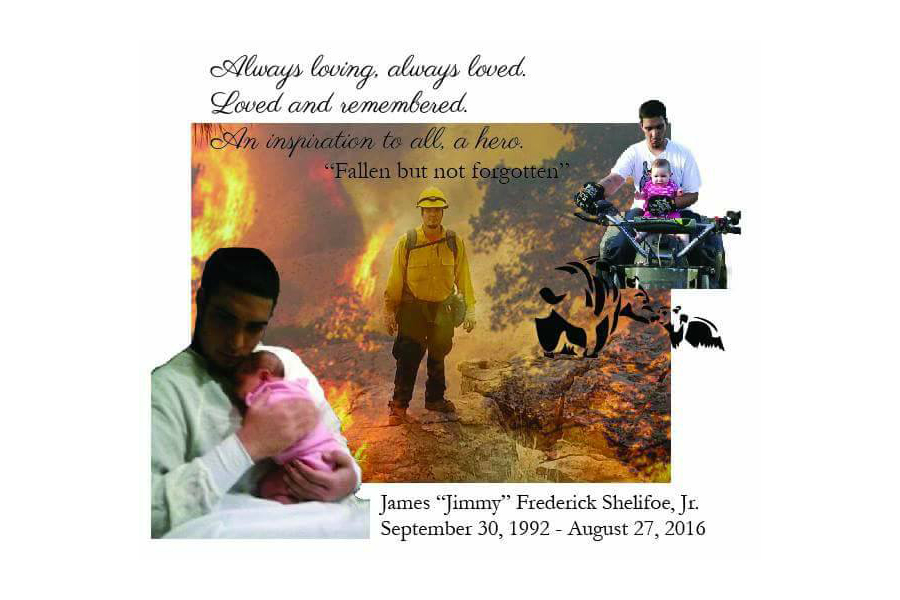