They say golden hour is the prettiest. I wait until it ends. I don’t usually plan exactly where to shoot, and in more spontaneous moments take a train to a stop I’ve never been to. Today, however, the plan was to take the F train to Red Hook, arriving at around 8:00 p.m. The hour after sunset is my favorite; the sky is a gigantic softbox, everything blanketed in the colors of dusk. “Blue hour,” some call it. It’s hard not to stare at the beauty of almost anything if you look close enough.

But today, like most days, I was not on time. Still in my apartment, my phone’s screen read 7:55 p.m. But that’s the thing with night photography—there is no time limit. When I used to shoot high school seniors as a side job, we lived and died by golden hour. The minute the sun disappeared past the horizon, there was virtually no point in continuing. 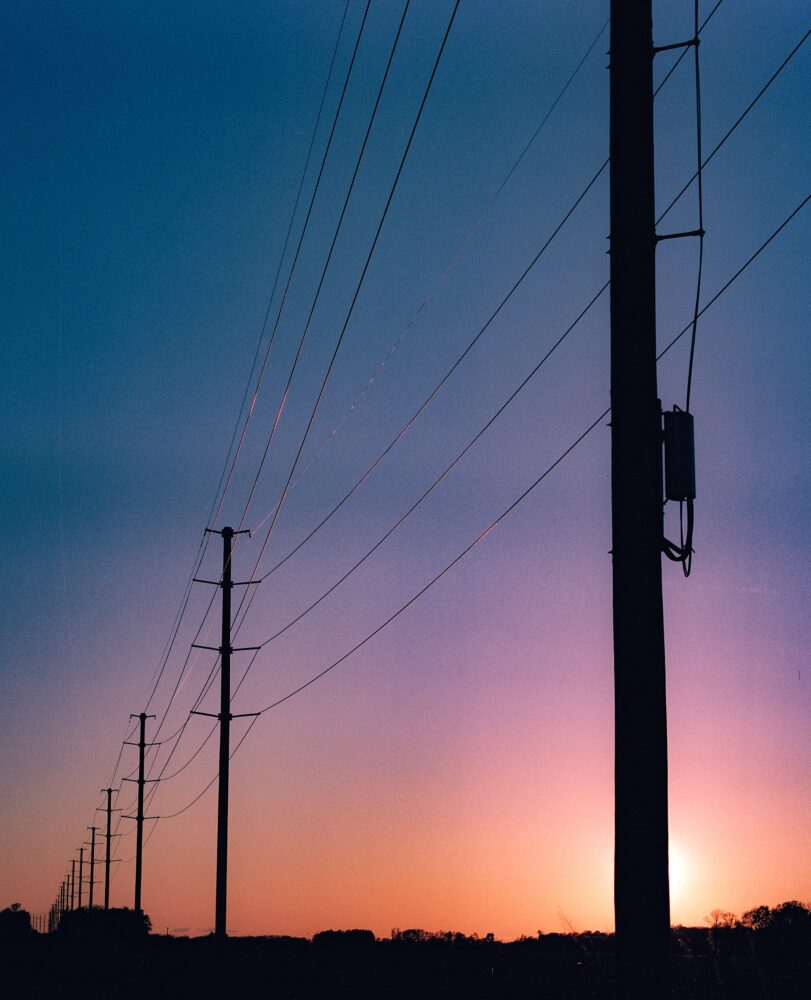 As I began packing my bag I made peace with the fact that the only lighting would be that of New York City’s electrical grid. First, film, specifically Portra 800; magical strips of chemical-laden plastic rolled into mysteriously tiny metal tubes. After I’ve shot each roll, they are sent to a dark-arts facility known as “the lab.” There, through a process as sensitive to light as the vampire himself, the spiraled plastic is reanimated into a series of images. Next, I load my camera.

My Pentax 6×7 is a mechanical masterpiece. At half a century old, it has not had any repairs. Through the simple motion of my right thumb’s advance of the shutter, it winds the film exactly 75mm to the right, keeping it flat against the pressure plate to +/- 0.1mm, repositions the shutter curtain, and is at once ready for another shot. Five pounds of dense metal and glass, its inner workings resemble that of a watch—though my camera must be accurate in timing all the way to a 1/1000th of a second exposure. In spite of its inner complexity, it has but two settings: shutter speed and aperture. My digital camera has more settings than there are moons of Saturn. I’ve never shot a gun, but from what I can gather from movies, my Pentax 6×7 must have the same, tactile-aesthetic appeal—they both shoot after all. 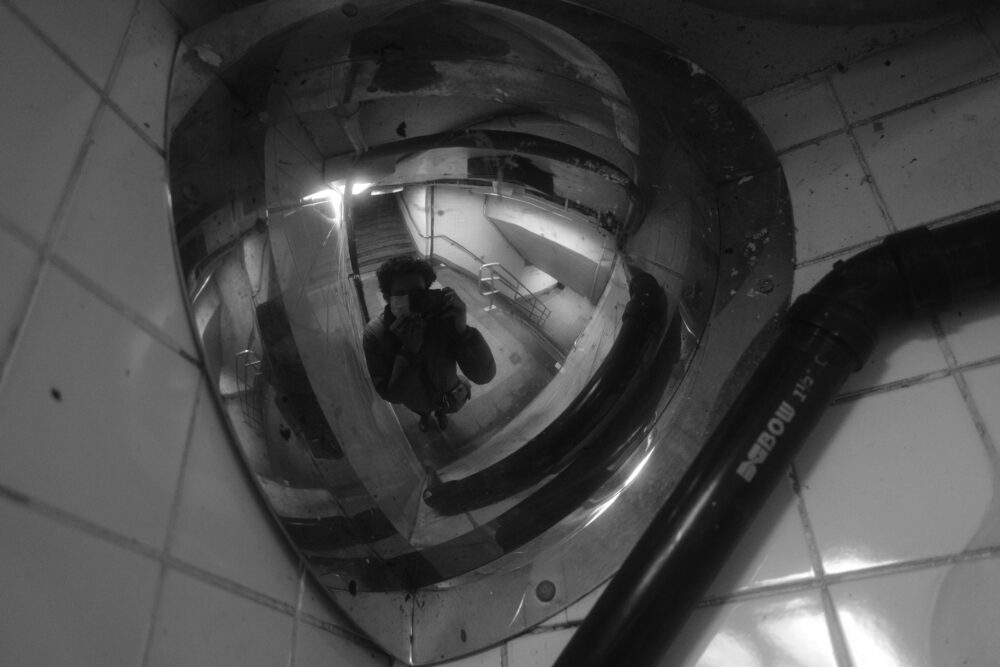 The type of film I shoot is larger than what one usually pictures when they think of a film canister—it’s a larger size of film called medium format. Every shot, every depression of the shutter button, costs $2.14 between film and development. Despite the camera weighing over five pounds, it captures only ten shots a roll (and my camera being fifty years old, occasionally nine). The photos take days to get back to me. The experience of shooting film embodies whatever the inverse of instant gratification is. To the practical, film makes no sense, but the photography I practice is not one that prioritizes practicality. In fact, it’s just about the opposite. In our ever more rapid society, where we seek speed and efficiency for speed and efficiency’s sake, shooting film is refreshing. With no screen to review the shots, or complicated settings to fumble with, there is nothing more to do than to focus on the act of image-making.

I have made the discovery that tripods and subways don’t particularly mesh well. When I took mine with me, it was too big to fit into my bag, so I propped it out on the floor in its shortest configuration, thinking that its tripod-ness would keep it in place and save me a hand. The second the train accelerated forward it tumbled down the length of the car. Strange looks darted my way…

For the uninitiated, being at the Smith-9th Street F train stop at night is one of the most supernatural experiences the city has to offer. Far enough from Manhattan, there are often no people on the above-ground platform. The city is framed by the platform’s metallic structure as if I had it all to myself. The trains come and go like nomadic travelers, leaving no trace. Curious creatures; shy from the attention of Manhattan, they retreat underground, only coming up for air further out, exposing their full selves. 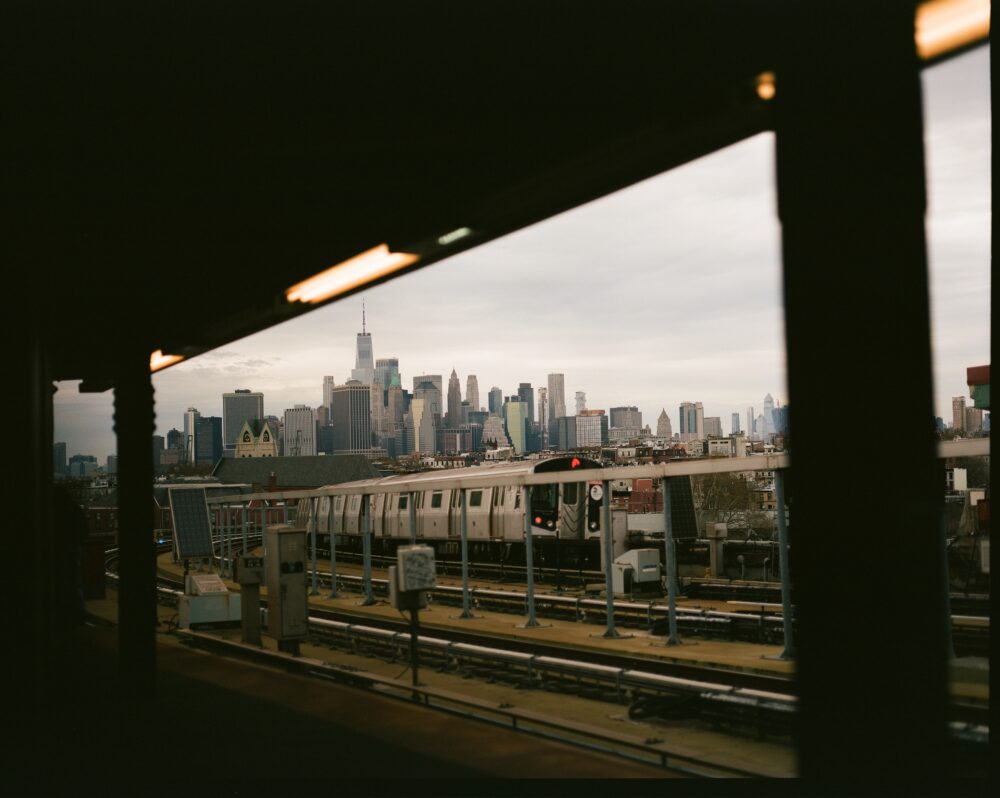 I meandered down the four long sets of stairs, decending into the city like a an archeologist descending into a cave. Walking around Red Hook at night, there is certain stillness that permeates the air. New York City, so characterized by movement and sound—cars, honks, people, footsteps, out-of-earshot conversation, traffic lights, flashing signs, squirrels—feels altogether unfamiliar. Now almost frozen, it feels like walking through a photo-reality, everywhere I look framed in a palpable stillness. Light comes in waves from sporadically placed street lamps. Looking in all directions with curiosity and wonder, hundreds of possible compositions tempt me. The world becomes an art gallery, every inch of detail its own unique work. But with only ten shots a roll, I have to be picky. Shooting film makes you think harder, and slower. So I move, walking back and forth, closer and further, forming a floating rectangle with my fingers to frame, until I am confident the composition is worth the shot, the scene now mine for safekeeping. 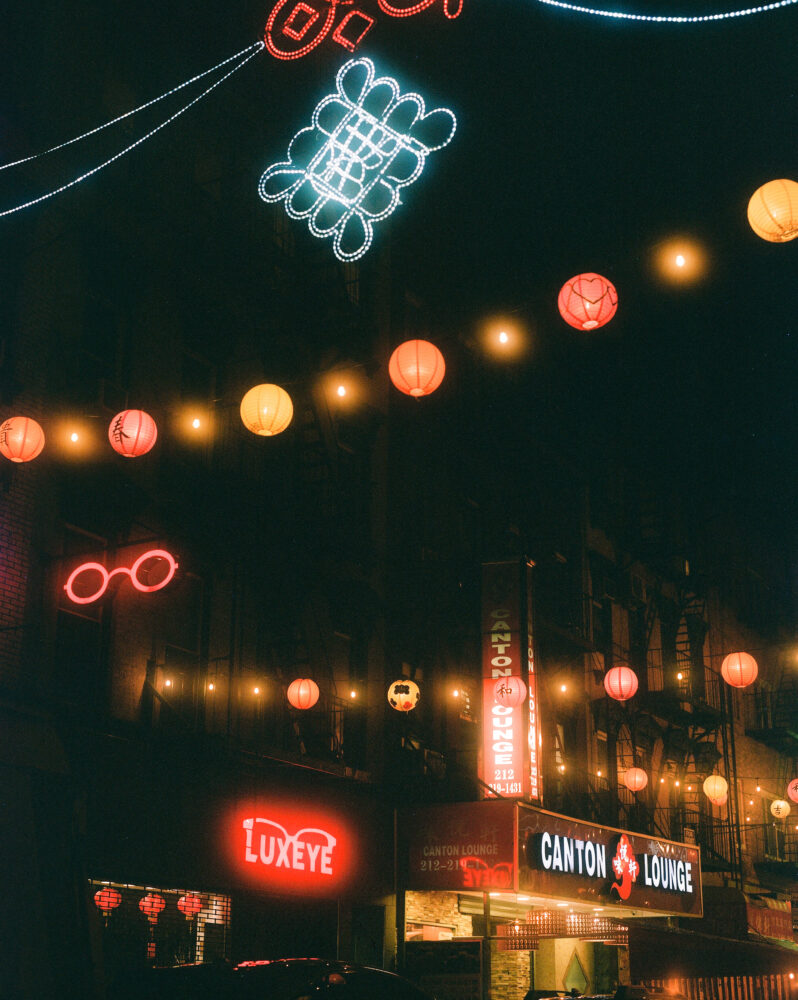 Constraints foster creativity, it is a well-documented phenomenon. Dr. Suess wrote Cat in the Hat with only 236 different words. His editor bet him he couldn’t write another book with only fifty. So Dr. Suess wrote Green Eggs and Ham, one of the best-selling children’s books of all time.1

Shooting film is a sort of constraint of the mind. It is not possible to try, say, ten various compositions of different ten subjects (or rather, I would quickly go broke). The photos being finite, I must choose carefully. The slowness and limitations that film imposes ironically produce more great photos. I am forced to look closer, squint harder, flex the muscle of seeing well—and this is all photography is at its core. 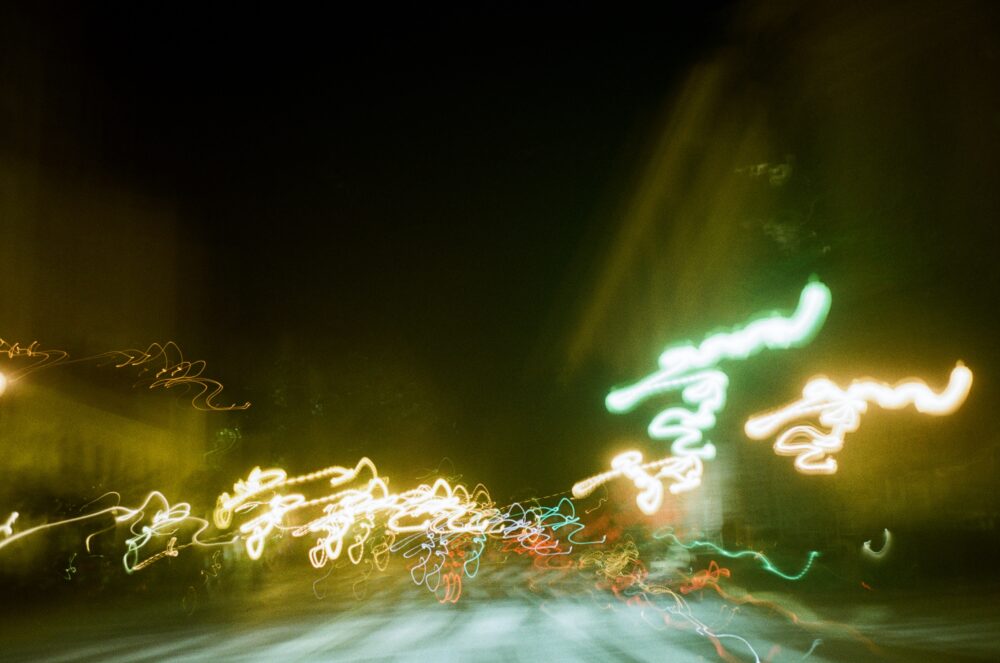 Walking further, a strange scene emerged: Old washing machines—about a dozen of them. They were commercial, coin-operated washing machines, weeds growing around and in between them. The scene appeared to resemble some sort of post-apocalyptic, outdoor semblance of a laundromat in the incandescently lit parking lot. My camera, being as old as it is, has no conception of how much light to let into itself. So I pull out my light meter—whose sole job is to do so—take a reading, and relay its recommendations to the camera: Ten seconds at F4. The shutter’s clunk is the loudest sound of the night. 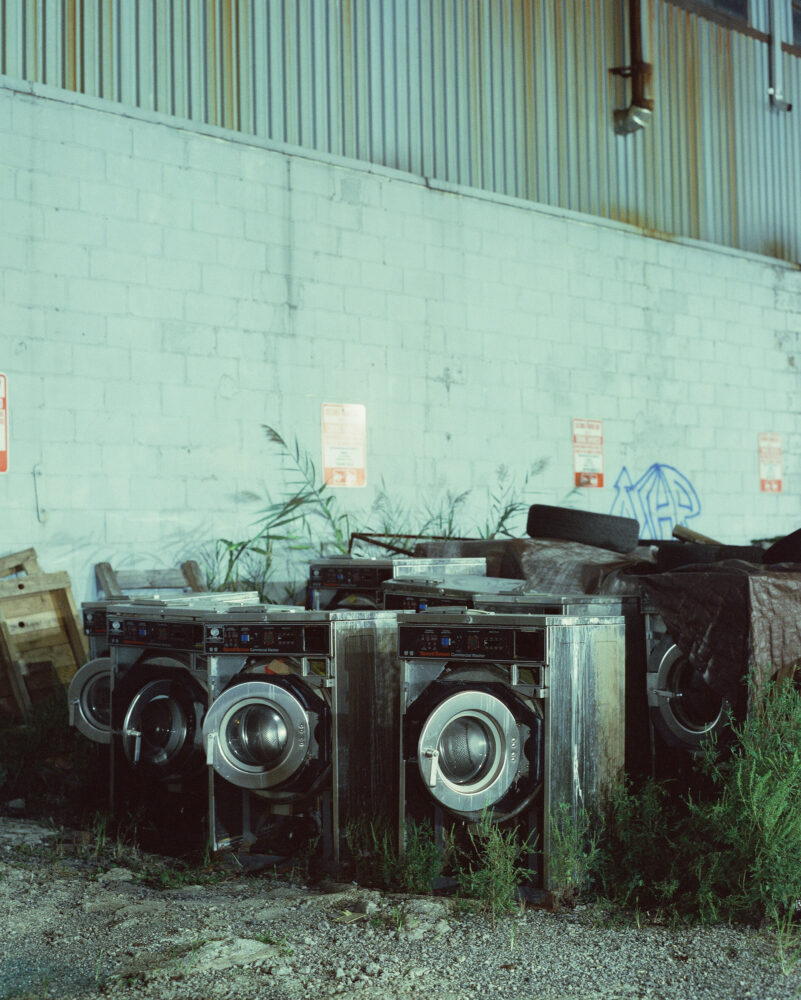 Some have a sense that photos capture objective reality. This could not be further from the truth. A photo captures objective reality to the degree a painting does. Colors widely dictate mood, and as such editing photos is as important as the capturing itself. With film, this goes even further. Despite being decades past film’s golden age, in 2022, there remain dozens to choose from, each with their own distinct color palette. In taking a photo one is also choosing what to include, and what to exclude. Like any other representational art form, however abstracted, a photo is a choice; in time, in composition, in color.

What makes photographs captivating is their stillness. In perceiving the world, we are never allowed to indulge our eyes in the stillness of the world. Imagine a movie’s opening scene; A field of overgrown grass with the sun above, a dilapidated house far back in the right third. Despite the fact that the scene is—to the greatest extent it can be without being a photo—“still,” most everyone is aware that it is in fact a moving image—the subtle sway of the grass, the light never unmoving. Life, time, video, has a certain movement to even the most static of scenes. A photo is perfectly still, frozen, a slice of the world in two dimensions: time and space. In a photo’s stillness, we are able to explore details previously impossible to perceive. Vision is anything but still; it is active, constantly in motion, for “what would vision be without eye movement?”2 This limitation of vision is what photography allows for—to dive into, and swim in, a moment’s stillness. 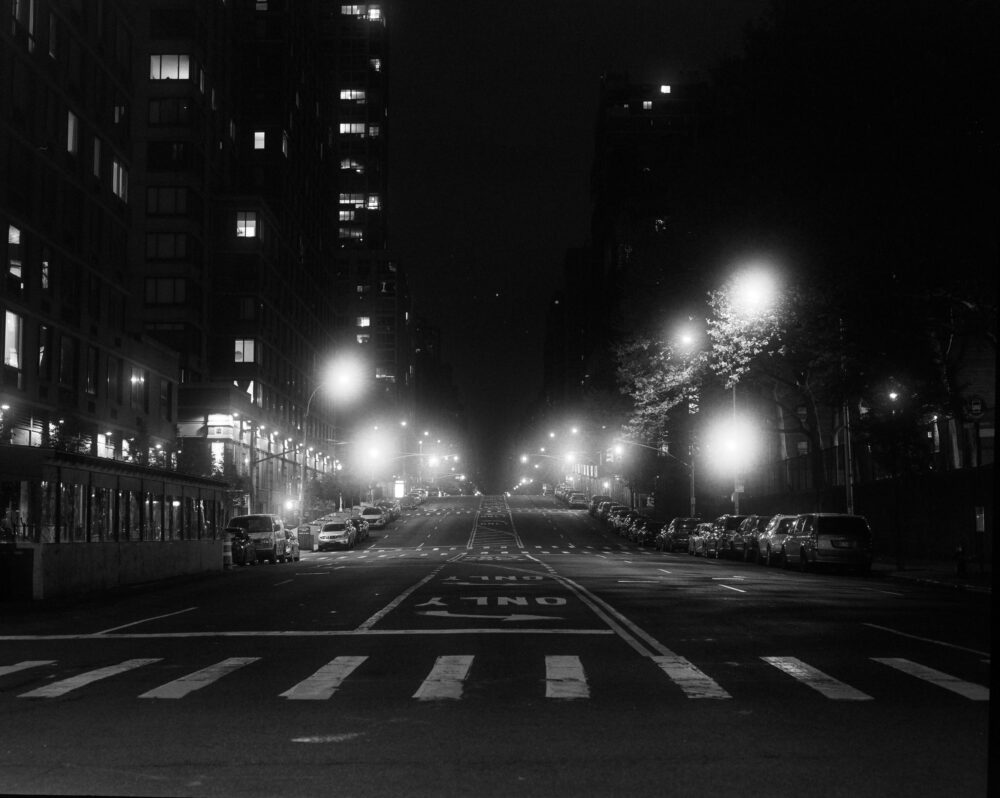 It is, I’ve decided, almost time to end the night. One more photo, I tell myself. My phone reads 1:22 a.m.—late in general, even later for my early-bird self. I spot a closed bodega with the inner lights still dimly on—a phenomenon that makes me endlessly confused. I hold my breath, click the shutter, and try my best to stay still. 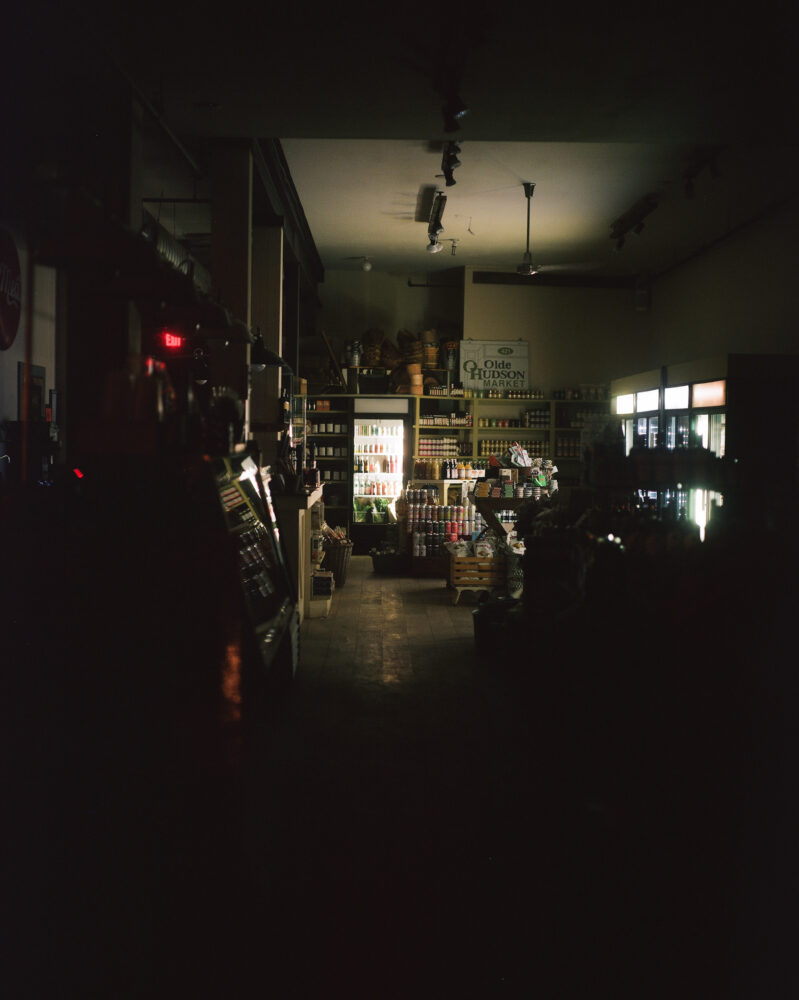 Why photograph? Why not? Enjoying the act of taking pictures, and looking at them is reason enough. Though for me it runs deeper. In photographing emerges a way of seeing. Camera in hand, I perceive the world more closely. There is a phenomenon that those who live far away from cities and light pollution will know well. Looking up at a clear night sky, stars are clearly visible. Looking longer, eyes slowly begin to adjust to the darkness, and new stars begin to show themselves that were there all along. This is what it feels like to photograph: to become sensitive to the world’s details and be in awe of them. My photography is not a practice in aesthetics, it is not even an art, but a way of looking at the world with wonder. Singer-songwriter James Talylor sings that “The secret of life is enjoying the passage of time,”3 and what better a way to do so than to appreciate its beauty. 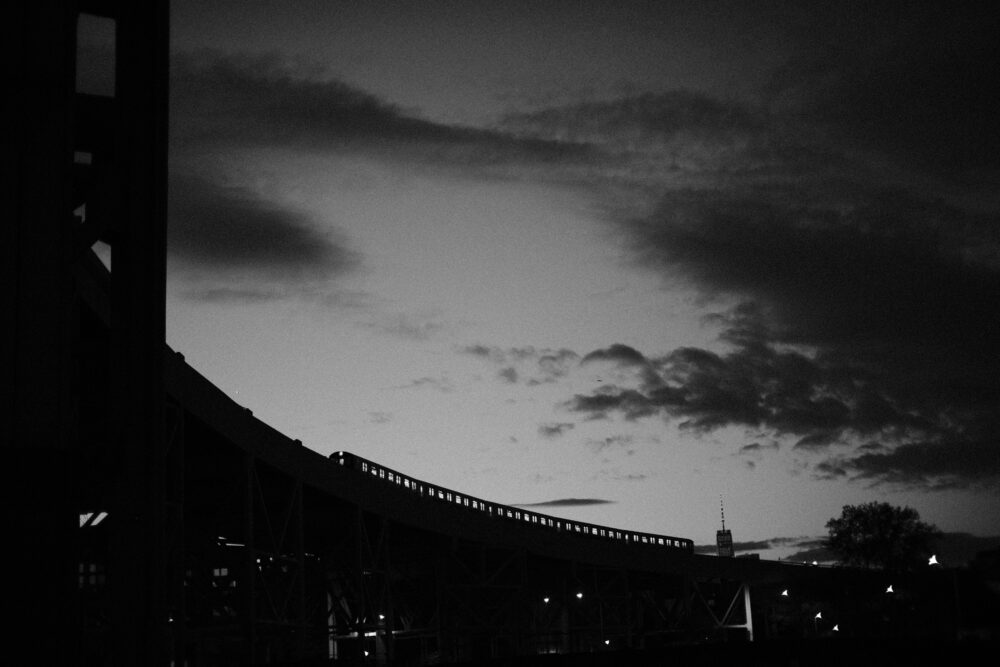 Armaan Ahmed (BA ’23) is a Spring 2022 Confluence contributing editor. You may access more of his writings and photography on armaanahmed.com or @armaanahmed_

Images courtesy of the author.