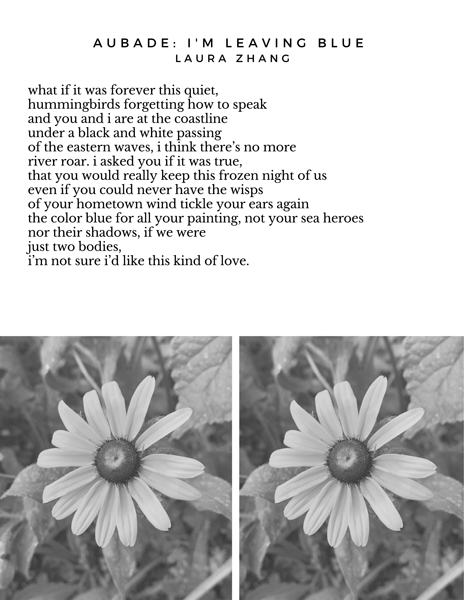 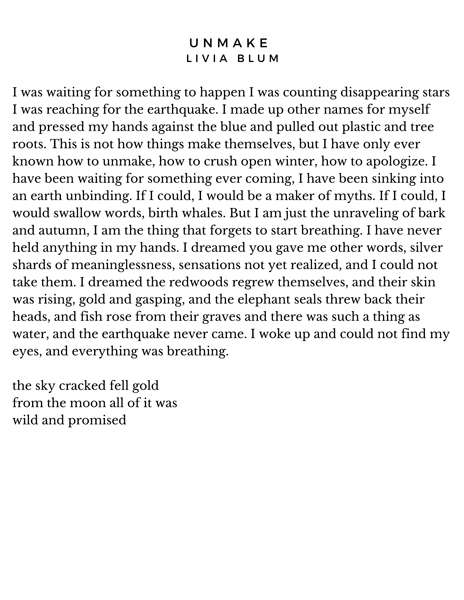 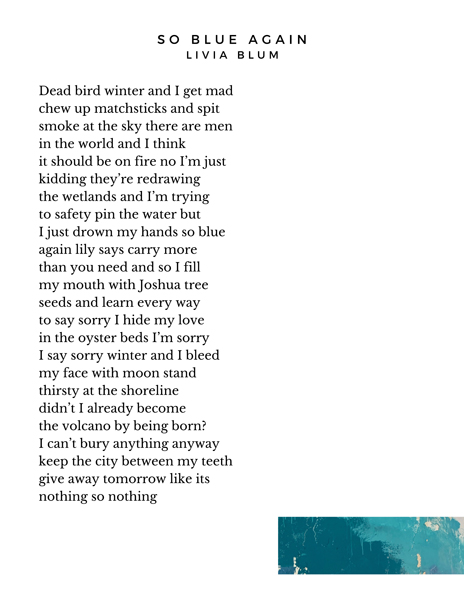 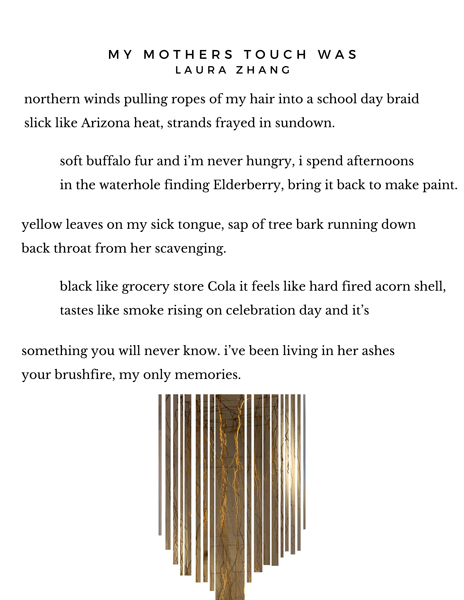 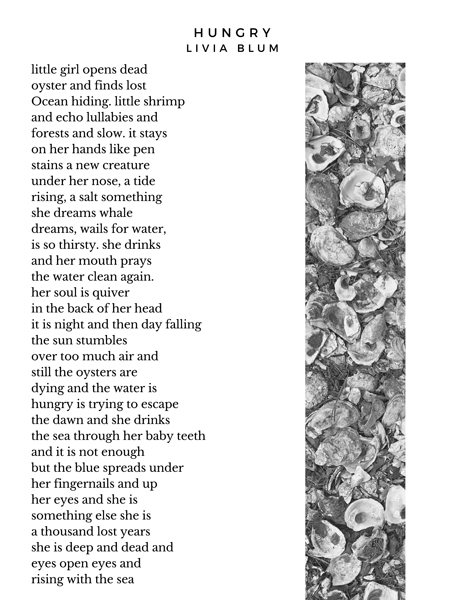 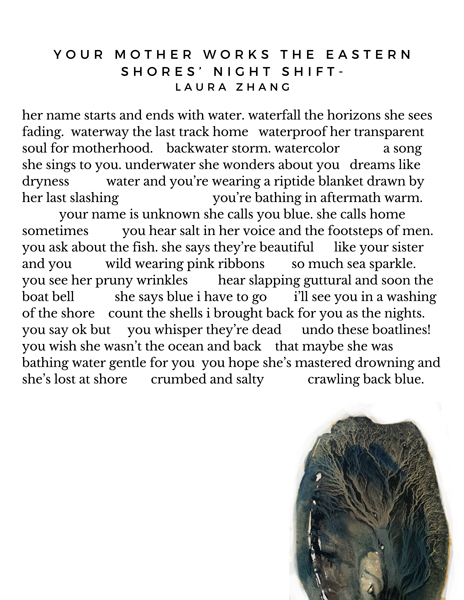 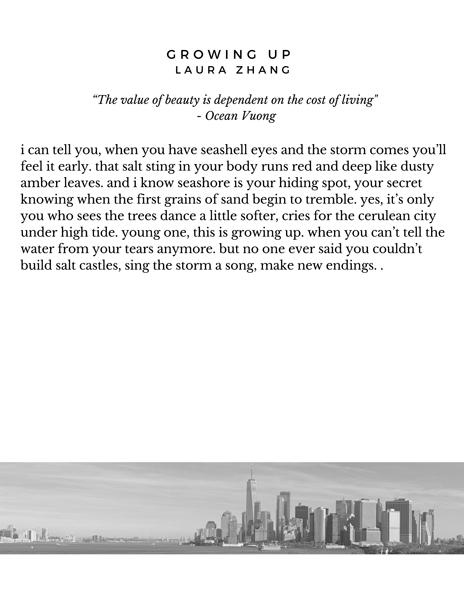 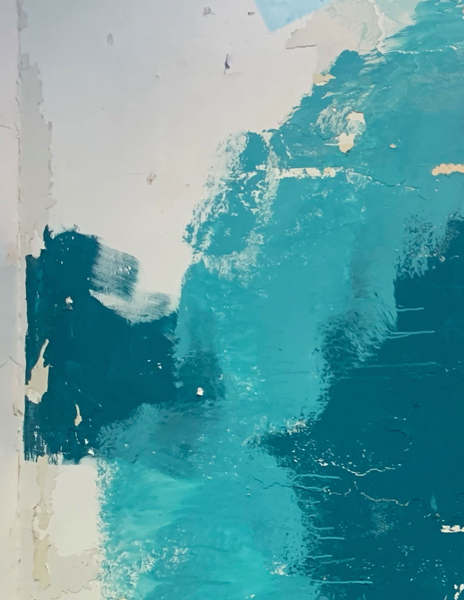 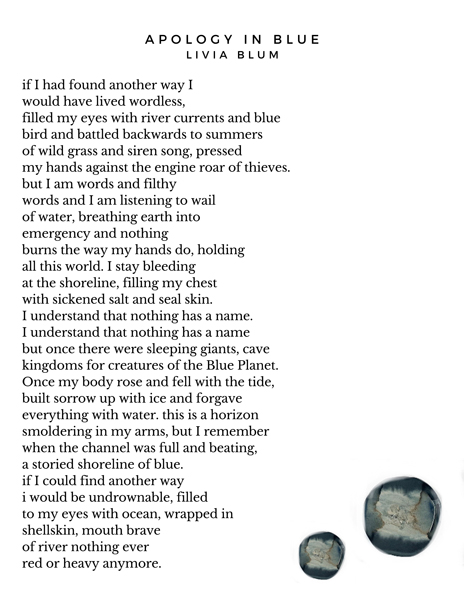 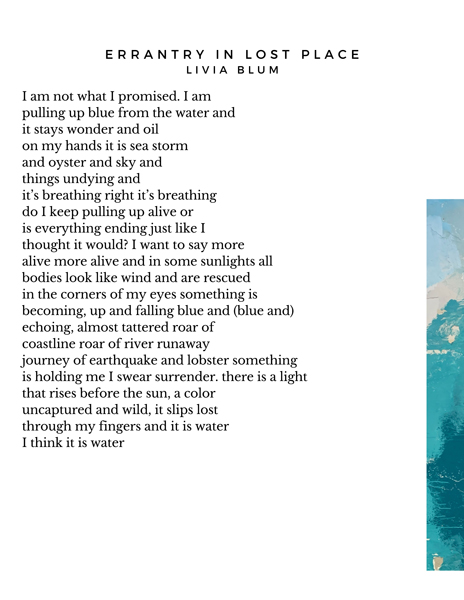 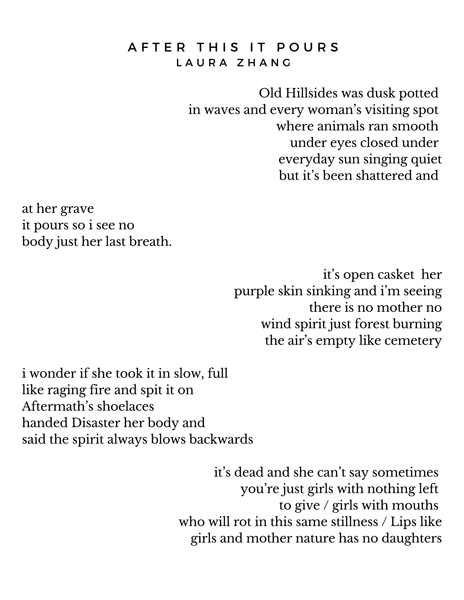 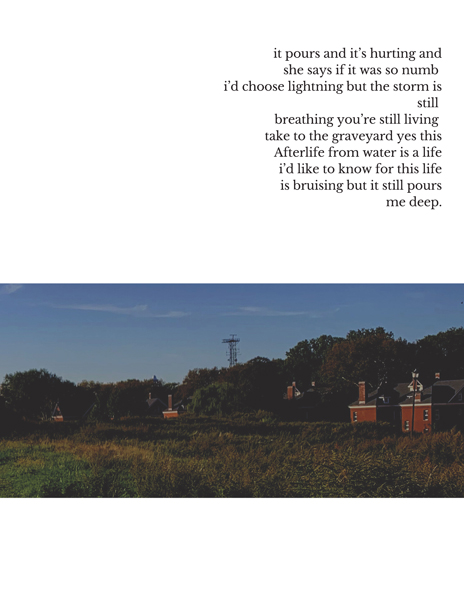 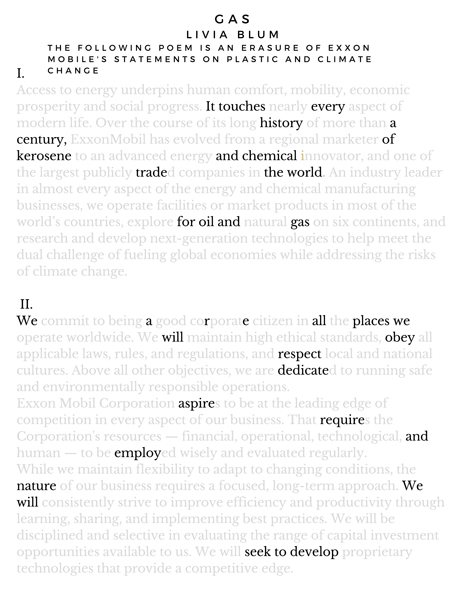 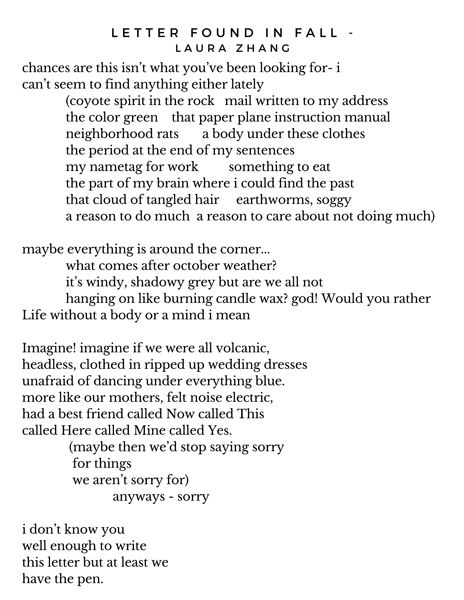 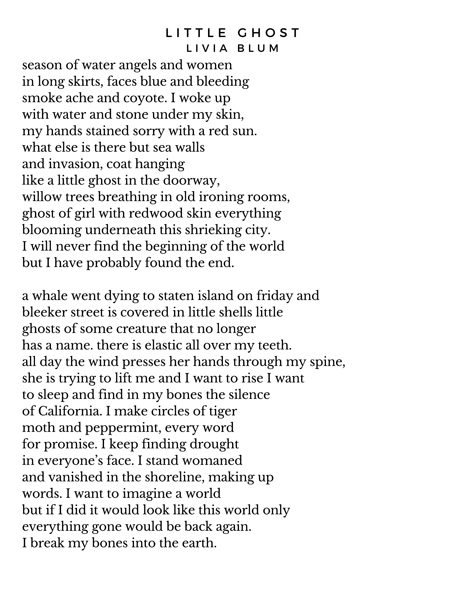 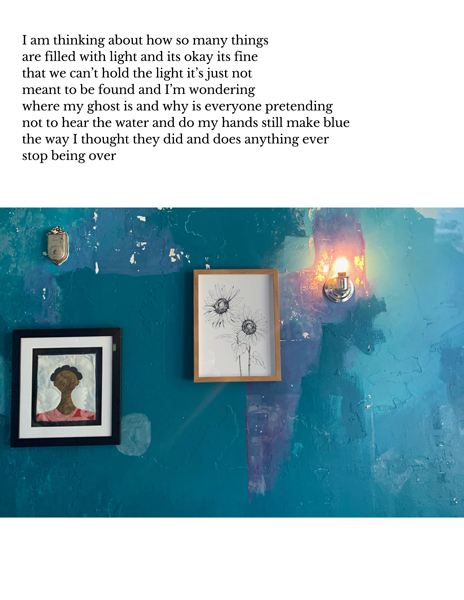 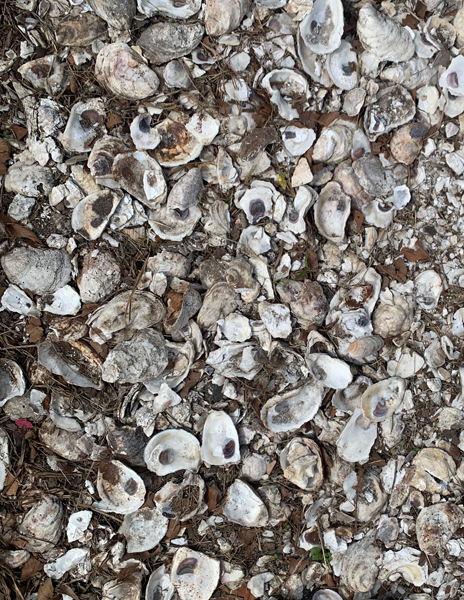 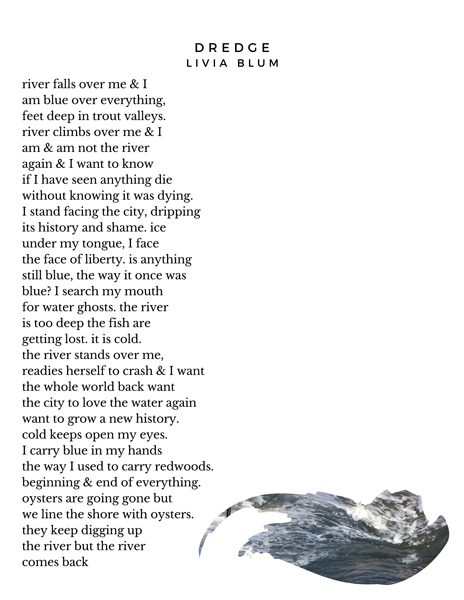 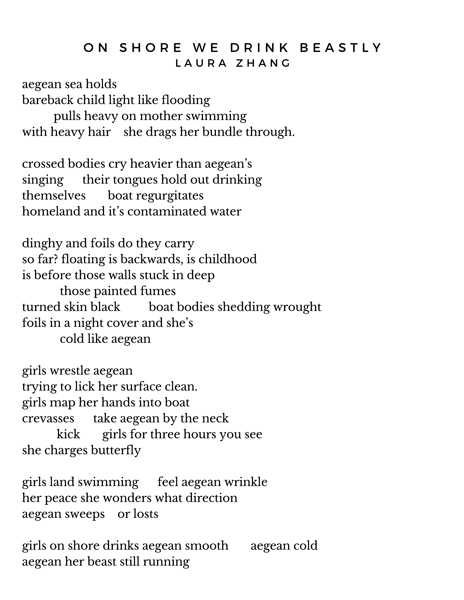 Read a text-only version of Between (PDF)

​​“It is unequivocal that human influence has warmed the atmosphere, ocean, and land.” This is the opening of The Intergovernmental Panel on Climate Change (IPCC) Sixth Assessment Report. It concludes, “the climate we experience in the future depends on our decisions now.”1 This semester, as students in Karen Holmberg’s Fall 2021 Interdisciplinary Seminar, “NYC Coastlines: Past, Present, Future,” we’ve engaged with science as an interdisciplinary process, and one that is deeply connected to ourselves. As part of the course, we spent time exploring Governors Island as a site of complex environmental history, coastal revitalization and a community of art-science exploration. This experience has been a transformative window into the current state of coastlines in New York City and beyond. Subsequently, the course goals of “individual agency, community, and creativity” are embedded into our imagination and inform the way we understand our surroundings and ourselves in the past, present, and future.2 Building off of the IPCC report, a scientific document assessing the effects and state of human-induced climate change, we present a collection of poems, Between. This work is an artistic grappling of the report’s contents to document another vantage point into the language of the world.

The latest IPCC report (2021) is a comprehensive and interactive representation of the current state of the climate, with a full assessment of the physical science of climate change, policy reports, and regional climate simulations that provide an extensive and urgent portrait of human-induced environmental destruction. In a chapter dedicated to “Ocean, Cryosphere and Sea Level Change,” the IPCC addresses the rapid shifting of marine ecosystems and water as a result of climate change, including marine heatwaves, ocean current changes, ice melt, and sea level rise. The report further assesses the current state of the world’s coastal zones and communities. Anthropogenic climate change has already increased the heat content of the global ocean since at least 1970, and it is virtually certain that this warming will continue.3 Surface warming has a profound effect on coastal systems and shorelines; in addition to temperature, “regional sea level change […] will be the main driver of a substantial increase in extreme still water levels over the next century”4 Specifically, “Over the 21st century, the majority of coastal locations will experience a 11 median projected regional sea level rise within +/- 20% of the median projected GMSL change.”5 Extreme sea level rise is an immediate and dire concern, and its effect on coastlines, coastal communities and cities, and coastal ecosystems is immense. The IPCC cites the Special Report on the Ocean and Cryosphere in a Changing Climate’s conclusion that, “The majority of coastal regions will experience statistically significant changes in tidal amplitudes through the 21st Century.”6 Coastal sea-level rise and water temperature has been and will continue to be significantly affected by human-induced climate change, resulting in flooding, coastal erosion, and extreme damage of coastal ecosystems and wildlife.

In 2014, the second working group of the IPCC focused on impact, adaptation, and vulnerability released their report on “Coastal Systems and Low-Lying Areas.” The second working group report for the sixth assessment report has not been released to the public yet, but in the last seven years alone, change in the form of disaster and slow violence continue to impact coastal zones at dramatic rates. The authors of the 2014 report write, “Coastal systems are conceptualized to consist of both natural and human systems;” vulnerabilities to coastal flooding and danger are also exacerbated in regions like Bangladesh: a lower coastal region with more poverty.7The parallels between human systems, food production, and housing to coastal properties including reefs, estuaries, and wetlands signify how as sea level rises, it is important to contextualize its impact on different regions. Authors say with high confidence that, “without adaptation, hundreds of millions of people will be affected by coastal flooding and will be displaced due to land loss by year 2100.”8 Their report includes  a map  features coastal cities that will suffer the greatest annual losses as a result of sea level rise without any attempt at adaptation.9 Notably, some of the most vulnerable cities are also key leaders in international climate organizing, such as COP26 and the Paris Climate Accord. By looking, then, at the predicted future of coastal zones through tools like the IPCC’s Interactive Atlas, we can better understand how these cities will transform with climate change as a pressing concern.

A 2003 figure from the Population Research Bureau examining “Coastal Populations and Shoreline Degradation” reveals how coastal cities with greater populations exceeding one million not only have mostly 30 to-70 percent of people living close to the coast, but also have some of the world’s most altered coastlines.10 Considering the aforementioned figure of annual losses in the 2014 IPCC’s Chapter 5 report, cities like Alexandria, Egypt, and Barranquilla, Colombia—where more than 100 percent increases in losses are projected without any adaptation to sea level rise—are also populous coastal communities near some of the most altered shorelines. It is rare that the population is none along the most altered coastlines; people must not be left out of prediction, and want to explore this relationship further.

Using the IPCC’s Interactive Atlas for Regional Synthesis, we configured five possible scenarios based on predictions of regional changes to impacts like heat, wind, air, and pollution, using a scale of confidence increase from “High Confidence of Increase” and “Not Relevant.” By filtering the map to five different coastal interactions, including relative sea level, coastal flooding, coastal erosion, marine heatwaves, and ocean and lake acidity, we can better contextualize how key coastal cities with big populations will be impacted by certain measures. For example, it is notable how in Eastern North America, the region of coastlines we’ve been exploring this semester, all five forces imply high confidence of increase in the future. In comparison, marine heat waves and ocean and lake acidity are confidently predicted to rise in all colored areas, whereas Canada, Greenland, and Iceland are in the “Low Confidence in Direction of Change” zone regarding the relative sea level. Additionally in places like Greenland and Iceland, coastal erosion is at the same “Low Confidence in Direction of Change” while parts of Canada increase to “Medium Confidence of Increase.” Further, in the IPCC figure on coastal cities annual losses and “Coastal Populations and Shoreline Degradation,” Canada and Greenland are not featured as those with the most altered coastlines or cities with huge losses in comparison to other zones.

The IPCC’s reporting draws on scientific research that reveals, in all instances, coastal changes impact not only the physical land and wildlife, but communities, economic strength, and imaginable other consequences like housing and food. The second working group’s report in the fifth IPCC reports emphasizes how regional and population response to human induced climate change is critical, and while “the exposure of people and assets to coastal risks has been rapidly growing and this trend is expected to continue,” this does not assume that every impact is proportional.11 As a way to contextualize the individual amidst the statistical predictions of the future, the upcoming poetry draws upon this devastating suffering and change as a reality, but also one that can be hopeful and with agency.

The regional visualization function in the IPCC’s interactive atlas also illustrates coastal changes as a result of climate change in New York City specifically. Importantly, there is a high confidence of increase in every single coastal related category, specifically, sea level, flooding, erosion, heatwaves, and acidity. It is clear that the city we inhabit has been severely transformed by anthropogenic practices.

By taking advantage of the multitude of tools and information offered in the IPCC’s sixth assessment report, we see in even more nuanced ways the disastrous future of our world if there is no intentional action taken to protect people and place. Considering all of this research, we are curious how individuals can conceptualize suffering and the future, particularly because although immediate circumstances like natural disaster bring climate change to the forefront of our attention, much of climate change is still a slow violence whose impact will last a millennia. One thing is clear- the world is changing, and we must find ways to grapple with it. We hope the artistic component of this collection helps illustrate the facts above not as some unfathomable reality, but rather an environment we are all a part of, one that is a part of us, one that we are changing along with.

Between is structured like a circle, with ten themes that characterize relationships of coastlines and climate. The book begins and ends with the theme of Refuge, and the subsequent themes run inwards, meeting at Water. Like how there is no one uniformity to the coastal experiences of the world explored in the IPCC research, poems within each theme may contradict one another in tone, work together to relay a message, or venture different avenues of actually seeing the world. We are intrigued by liminality, a threshold or state of transition, and the littoral zone, where the water meets the shore.

Our research on anthropogenic climate change and coastlines, and the dangers shoreline ecosystems, marine life, and communities face in light of environmental disaster, underlies the importance of paying attention to both land and sea, and how their unique meeting is transforming.

We, the two authors, feel that this approach offers a theoretical exploration of how agency of the self as it relates to the natural world can be reassuring, violent, raw, protective, and complex. Therefore, we introduce this project as Between; how is the liminal space between land and sea distinct? What do the connections between sea and story, art and science, tell us about “us” versus “them”; “here” versus “there” today and tomorrow? How do we rebuild our relationship to the Earth as individuals amidst a rapidly changing environmental landscape? Between is a poetic embodiment of the coastline.

It is our hope that this collection serves as a fluid documentation of our semester on Governor’s Island and beyond, and can be read front to back, back to front, or poem by poem. While the work captures a unique moment in time, in writing we ensure that individual and collective agency remain unbound. We attempt to use language as a means to see and feel science in new dimensions. This is a collection of fleeting moments, everyday scenes, and our visualization of the world around us, in all of its pain and wonder.