I spoke with Tonya Ingram about her love of writing poetry and her motivation to perform. She shares, “I do it because for me it is the only way to understand where I am going. I feel like it is my responsibility to myself and to who I think I am talking to.” Her work ranges on subject matter, but each piece is deeply emotional and evocative. When asked about her inspiration, Tonya says, “Mostly I write about personal experiences because growing up I was very introverted.” I was fortunate enough to get a private performance of Tonya’s poem, Ode to Walton Ave., shown below. The power of her words and the experience of watching her perform is really something. For advice to up-and-coming poets Tonya says, “Do not doubt your work, do not doubt what you have to say. I see a lot of kids get up there who want to be rock stars. I think what’s more important is why you even showed up to the slam in the first place. Believe in what you have to say.” 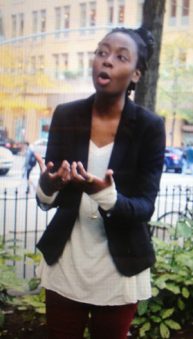 “Poetry helps me to talk about anything; it helps me to understand the world. I create because it’s necessary.”

Tonya Ingram, a Senior at New York University, is one of SLAM! NYU’s founding members along with Eric Silver, Matthew ‘Spitnice’ Sparacino and Safia Elhillo. In 2011, Ingram placed first in the Knicks Poetry Slam and won a $10,000 scholarship. She is also a member of the 2011 Urban Word NYC poetry slam team that placed second in the nation at the Brave New Voices International Poetry Slam Festival in San Francisco, Calif. She earned the title of Grand Slam Champion for the second time at SLAM! NYU’s Grand Slam for the 2013 team.