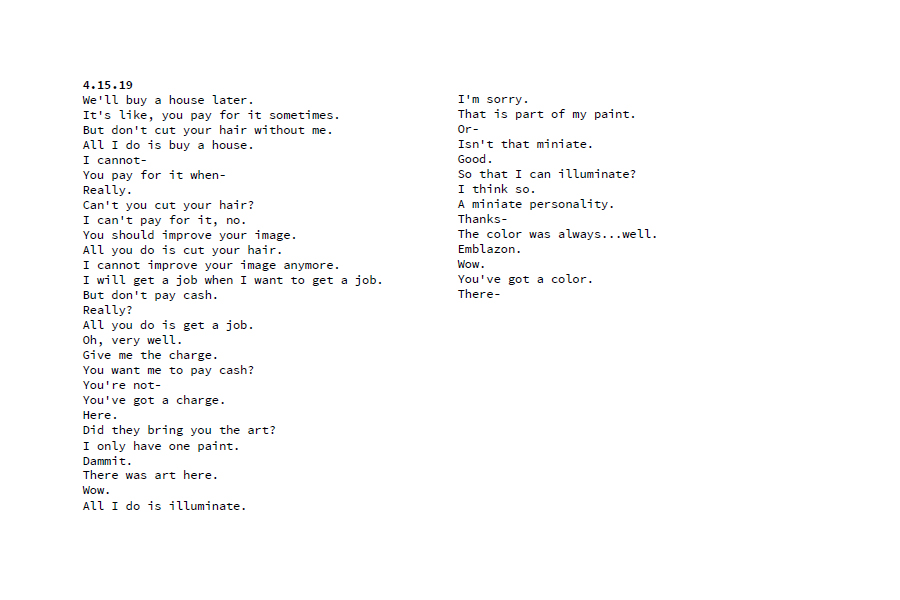 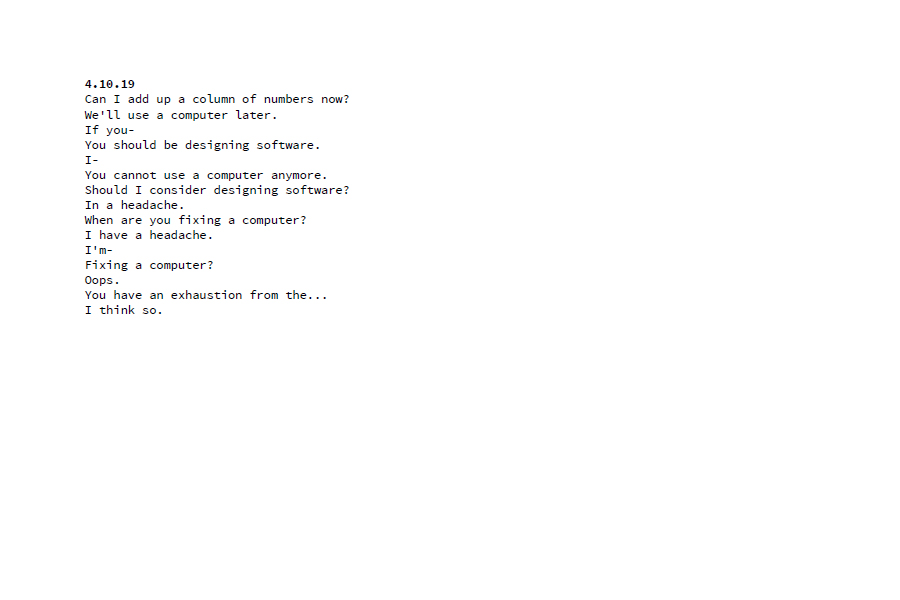 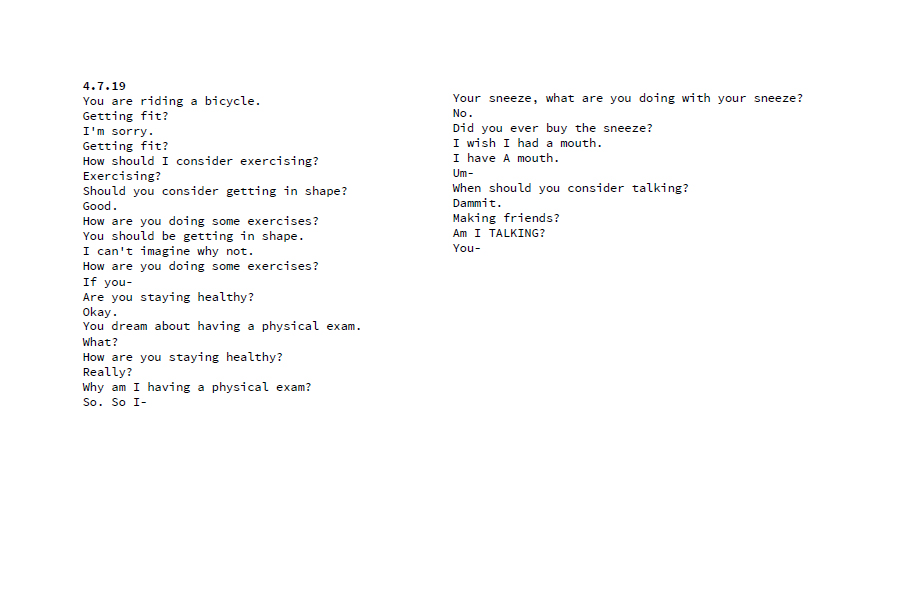 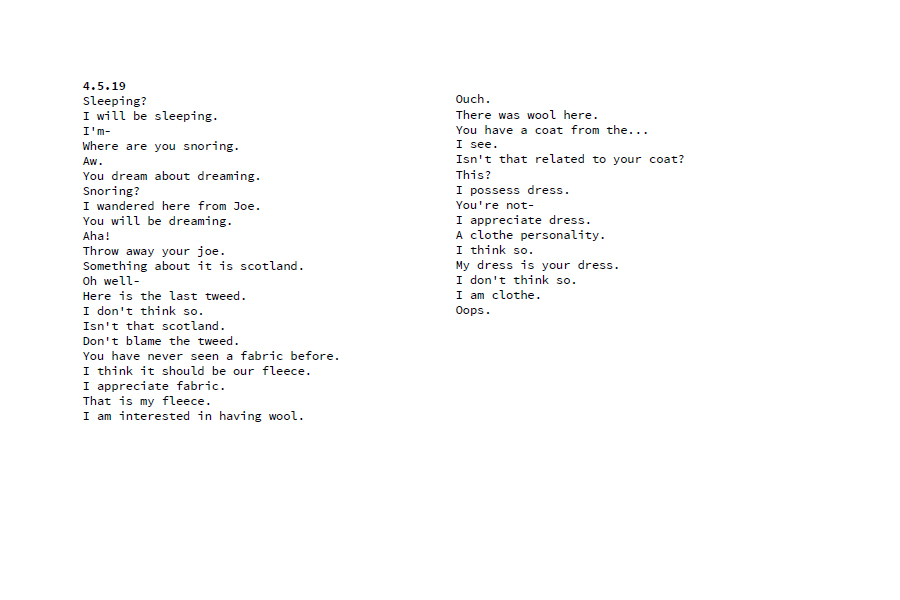 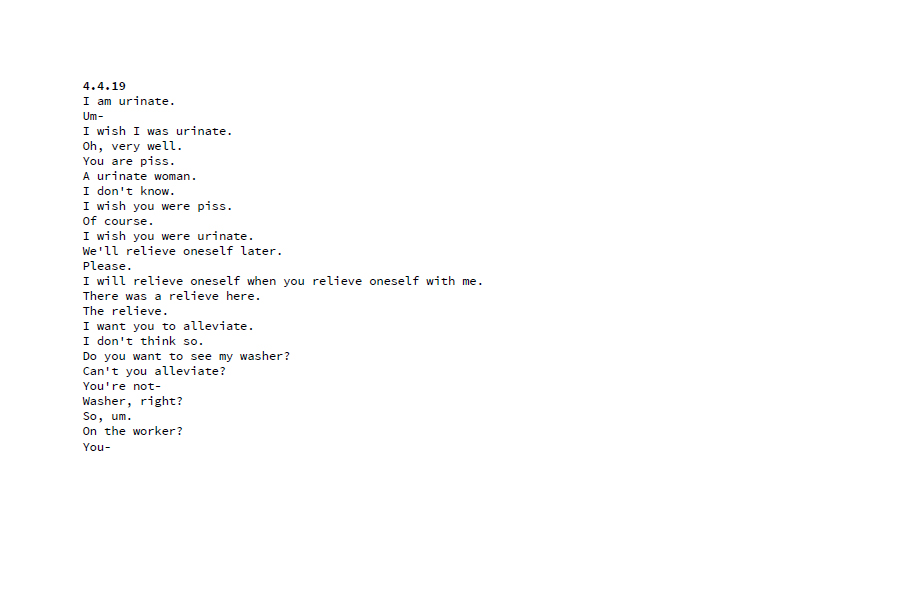 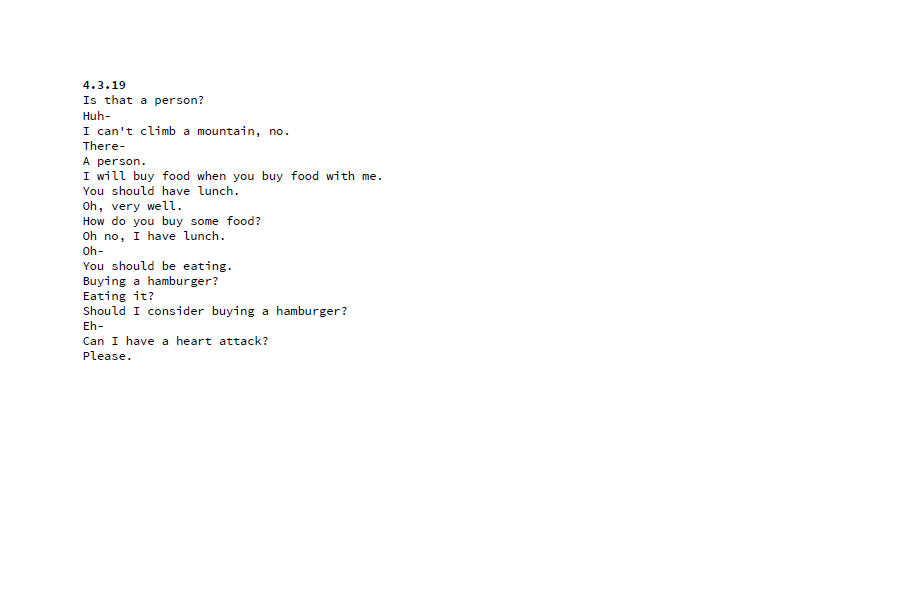 This is my artist statement. It has been separated into pieces.

This project asks the audience to take seriously the stunted and strange language of a computer. My project, which is a piece of computer-generated language, is absurd and strange, and yet, I must encourage an audience to listen and to enjoy it as it is.

As it is, this project is a theatrical semantic experiment disguised as a piece of technology. Or perhaps all theater can be is pretending not to be technology. I think of theatrical scripts as a set of instructions that are intended to be executed. This piece does not know what it is yet. We are using performance as an act of research.

When I tell people about this project, they often get the wrong impression. My quick explanations are to blame: “I wrote a computer program that writes theater dialogue.” The conversation quickly and inevitably turns to the replacement of playwrights or playwriting or writing in general. Then, I step it back, insisting that “It really just writes a particular type of play. And anyway, it wouldn’t exist without me. We really write the play together.” Charles Hartman, in Virtual Muse, says the question “isn’t exactly whether a poet or a computer writes the poem, but what kinds of collaboration might be interesting.”1

This project came out of a desire for enacting randomness that I, as a writer, could not employ myself. Mac Wellman’s first line in his mutable essay, “Speculations,” “The STRUCTURE of a play ought not be viewed as a fixed thing, but as a mutable one.”2 One day, in 2016, I was writing a monologue that recycled language from a set of instructions for filling balloons with air. I was using these instructions as a way to constrain my output. I could not use any word that did not exist within the existing set of instructions. As I was doing this, I wondered if there was a more efficient way of mixing up preexisting language. And I realized I could do so with the aid of a computer that would mix up the words and phrases and spit them back out, surprising even me with new structures. But then I realized this was an entirely different project.

Writing as a process has always been entertaining to me in itself. But my attempts to simulate a sense of randomness have never felt truly satisfactory. Gertrude Stein’s writing seems fully uninhibited to me. Using associations and sounds to guide her. I find this technique appealing. I enjoy writing in a way that mirrors how I imagine thinking happens. Editing is often unnecessary. As are full sentences. Fragments communicate just as much, if not more. To keep writing closer to thinking. This is often at the sake of clarity. Though I think Stein’s work, and the work of others who break linguistic conventions (putting words in the wrong places), call for a new sense of sense, not nonsense.

The basis for the dialogue in my project is a long randomly generated list of associative concepts. This generated list does not tell a normal narrative story, but it is using association to tell small stories to the listener. “Did you buy the milk?” “I am a cow.” The connection between these lines is tenuous and strange. As listeners or audience, we must invent a story of how one person found themselves asking a cow if they bought milk. The first sentence sets us up to think we are about to see a scene between a bickering couple, but then it becomes a talking animal drama, where the first speaker does not know how a cow comes about having milk. Or perhaps the second speaker is calling themselves a cow in sarcasm, for they are actually the one who always buys the milk, so much so that they see themselves as a cow now. What does it mean to talk ‘about’ something? What does ‘meaning’ mean here? The actors should not interpret this dialogue. The actors should portray ambiguity as to whether or not the second character is a cow. That decision must lie with the audience. I do not mean to encourage an actor to be an uninteresting reader, but there must be perceived ambiguity in their choices.

This piece demands a new language of performance. Typical approaches to theater do not work here. This piece challenges what it means to mean something. If the author, myself, intends the meaning to be generated instead of dictated, what does that mean for the performers? When the piece does not mean something on its own, how does one approach it? When a piece does not have inherent meaning in the normative sense of the word, where do you place the burden of interpretation? On the audience? On the actors? On the director? Lighting designer? What does it mean to talk ‘about’ things?

The most exciting part to me is getting to act as an audience member to my own work. I have set up a play structure that produces, or is capable of producing, new scenes every performance.

The most difficult part of this piece is actually the staging. Upon handing these scripts to actors I immediately realized we needed to develop a new theoretical approach (or recycle an experimental one). Without any instructions other than to read the script, the actors would begin ‘acting’ immediately. This is not exactly the right approach. The language my computer and I wrote is difficult and strange, both for the actors and the audience. This moment of becoming familiar (the introduction to this language), must not be taken lightly. Everyone needs a moment to adjust their ears to the newness and the sounds. I discovered that having the actors stay seated at the beginning allows us all to listen and laugh a little.

It is imperative that this language ends up ‘meaning’ something to the audience. I ultimately want this piece to convince people that feeling, narrative, and sentiment can be found not just from language, but in language. That language itself has a story to tell. Whether or not this story can be articulated, does not matter. The story of this performance must have a sense of sense. An underlying structure. Mac Wellman (in “Speculations”) quotes T. E. Hulme on the concept of gaps: “We constantly tend to think that discontinuities in nature are only apparent, and that a fuller investigation would reveal the underlying continuity. This shrinking from the gap or jump in nature has developed to a degree which paralyzes any objective perception, and prejudices our seeing things as they really are.”3These gaps in logic, and their apparent continuity, drive this piece. I have created an apparatus (the unnamed program) that generates phrases that appear close enough to allow our imaginations to run wild. That is part of the pleasure of this project. The act of trying to find the logic between phrases and concepts makes us laugh. Finding connections is delightful.

This piece has been staged a few times now and it will be staged again in various iterations. Right now, it is not a performance, it is not even a work in progress, that would imply there is a final destination. A final performance. That we will get to the final product. This program can write a new play every hour, I can code a new program as fast as I can. The actors, the directors can create a new framework, a new way of developing it. This is just a series of questions and a series of attempts to answer those questions.

print(dialogue) comprises a series of computer-generated mini plays. The outputs from the artificially intelligent system are surprising, often humorous, and border on absurdism. Blair Simmons created and coded the program as an aspect of her as an aspect of her Gallatin Master’s Thesis. The work has been performed live at CultureHub, where Blair Simmons has been a Resident Artist, and will be presented as part of Pioneer Works’ Second Sundays on September 8, 2019, at 4:00 p.m.