A standard classification of people’s reactions to social situations is the division into extroverts and introverts. In most situations, you can either be a passive observer or an active participant. People must bring energy to observe, process, and then react to events in a social context. The level of energy needed to react to a situation shows the fundamental difference between introverts and extroverts. Introverts expend more energy and are not recharged in social situations; an iconic introvert is one who wants to take in the world as an observer and only spends their energy when needed. Extroverts, on the other hand, rely on the energy of being a part of society. Many workplaces and social situations are designed for the extrovert, forcing people into endless meetings and networking as the way to share and deliver ideas. A utopian body for an introverted worker would be one where the body is able to be present in the situation to observe without being required to participate. 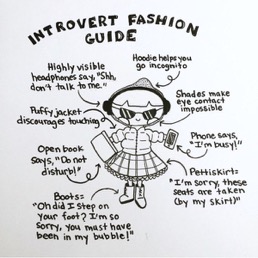 Bodies can be seen as objects that take up space in our world. They have established borders, they start and stop at a location. A body can either be in a place or not in place; a body is unable to be simultaneously both there and not there. When a body is there and it is taking up space, it is part of the scene. Its presence adds in some capacity to the narrative of the event. Bodies are then characters or pieces of the narratives in life.

Bodies are in fact things that take up space. As explored in class, societal norms will dictate if individuals feel like they deserve the space that their body occupies. But it isn’t just societal norms that make people comfortable allowing their body to exist in space. The comfort can come from within in the genetic makeup of the person. Introverts have a higher tendency to feel uncomfortable in taking space.

The notion of a lived body, explored by Iris Marion Young, highlights the intersection of the body and situation. The body is not just the qualities that define it but the impact of the situation on the body. The body is then seen differently based on what situation and context it is in or has been in. But what if you can observe a situation and not be present in it? Can you disentangle the participation of experience from a body? Is it possible to be present and experience when you want to and disappear into the background when you don’t?

In “Breasted Experience,” Young explored the notion of the breast not being an object but being fluid instead. Things that are fluid do not have a defined shape and location; they transform from an object that someone owns to something that just exists. What if we imagine not just breasts as fluid but the whole body being fluid? Taking this one step further, Could bodies be transparent? Fluid and transparent, a body transforms into a similar substance as air. If a body were air, it could be both present in all situations and noticed only when needed. This kind of body would allow an introvert to exist in a situation but to be relevant only in the times where it is relevant that it is there. Bodies as air would allow the body to be both in and not in an event depending on the relevance of presence rather than the use of space.

“The Desires of an Introvert” was originally written in Professor Elena X. Wang’s Graduate Elective Bodies at Work: Gender and Labor in Contemporary Visual Culture.” It is one student’s response to the prompt If you could be any kind of body, what would that be and why? Read others.