“Beneath the Concrete, Three” was originally written in response to the creative process for a final performance in Leslie Satin’s Fall 2017 Arts Workshop, “Making Dance: Space, Place and Technology.”  The dancers, all Gallatin undergraduate students, were Emma Forstenhausler, Elinor New, and Ingrid Apgar (me). The computational side of this choreographic process involved coding, mainly using the language Java in the Processing IDE (integrated development environment) to create visual representations of geometric or linear objects, such as rectangles and ellipses, in addition to parametric and polar coordinates drawn from various mathematical equations. The movement side grew out of an unexpected spatial circumstance in my life, an impromptu movement problem of sorts.

One. In a sense, I believe that moving to New York initiated the growth of my personal space bubble. Recently, I did not physically touch another human being for one week—no hugs, no fist-bumps, no accidentally walking into someone on the train. This was not intentional, nor was it artificially prolonged once I came to realize what was happening, but rather it was a combination of constant studying for my computer science class, not being in the mood to embrace friends, and various dance partners being absent from rehearsals that extended this period of spatial solitude. When the week concluded, I experienced a markedly different kinesthetic response to physical touch; every bit of contact felt as though it penetrated three inches beneath my skin, which created a sense of hyper-awareness whenever my personal space intersected someone else’s. 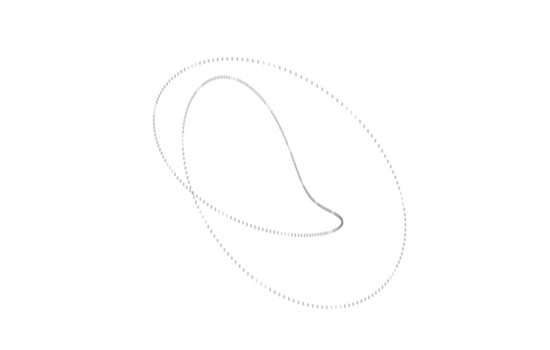 My final movement exploration of the semester toys with this “three-inches-deeper” idea through deliberate contact, from carrying a person to holding hands to piling on top of one another. During the rehearsal process, I made explicit that touch should not be taken for granted. The main physical component of the piece is comprised of a movement problem, wherein a single dancer is to remain standing or crouching on a large wooden box; the difference in height created by the box is intended to be a separating factor from the other two dancers. Throughout the piece, layered solos, duets, and trios take place both in and out of the audience’s immediate sight lines. Each of the three dancers has their own solo derived from basic, randomized instructions: create ninety-degree angles with your feet, “wiggle up/wiggle down” with “sloth-like” arm interjections, adapt a single Fosse hands motif and slowly expand it to become full body. 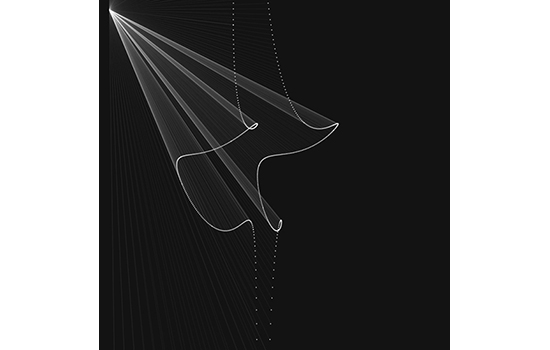 There are three main technological components that work with the movement in the piece: the mathematical, equation-based visual scores of parametric and polar equation graphs from which the solo movement problems were derived; the video scores projected onto a screen behind the movers that create a durational restriction; and, lastly, the auditory component, a consistent hum played over the room’s speaker system and through mobile devices behind the audience. The first component is not shown within the performance itself, but, because I personally find the scores to be movement-oriented and kinesthetically evocative, I handed them as printouts to the audience afterwards. The second is more visually incorporated—a great number of translucent squares, circles, and quadrilaterals fill the screen behind the dancers, inevitably creating overlap. For me, the first instance of digital overlap is as evocative as the first instance of bodily overlap (which can in turn be as evocative as the auditory overlap some viewers may experience as they hear the accompanying sound score playing from the devices behind them). The limited in-person rehearsal time the three of us were afforded was spent feeling the groundedness and undergroundedness of layered bodies, consuming and reacting to pressure and touch, but also investigating what it means, as embodied movers, to be sharing the stage and space with video technology, and how this alters the way audiences prioritize what they’re seeing. 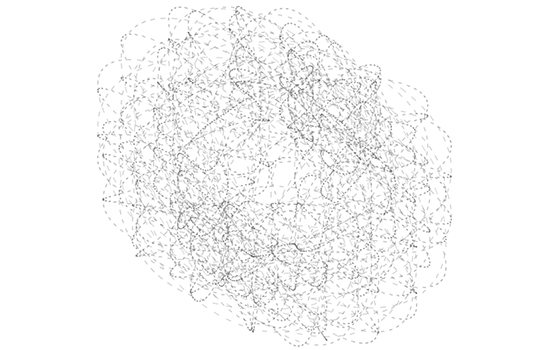 Two. Much of what this piece has become was unplanned and unexpected. As I was brainstorming after submitting my final project plan, I found myself only thinking to explore familiar things (mirroring and direct reflection, mainly) in new ways—not an unacceptable idea, by any means, but perhaps safer than where I was hoping to take this opportunity. Because I thoroughly enjoy putting off all of my schoolwork to create little visual representations of my code in a Java-based program called Processing, those coded motifs remotely informed my physical choreography until I chose to feature them as videos projected onto a screen during the performance. Creating a piece from my experience of extended solitude (which, again, occurred as a result of my need to study and code extensively) feels comprehensive in that coding naturally led to the spatial isolation, but it also feels like a risk; it’s difficult to predict whether the connections which seem obvious to me will read. However, the initial choice to work with three dancers feels like a risk too, as I’ve rarely worked outside of duets, as does using a box as a prop. There is an added layer of complexity regarding whether an object changes the movement, how it alters the way the body perceives and takes up space, and whether it, too, is distracting to the audience’s experience of watching my dancers move. This still leads me back to something I find myself coming across often, which is the idea that the technology shouldn’t overpower the movement, that the props shouldn’t overpower the movement. Says who? 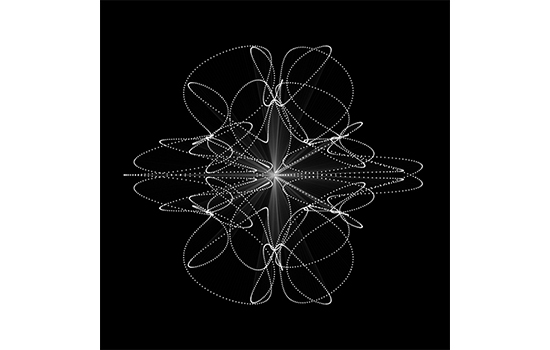 Three. I expect my choice to project scores onstage to be challenged, for people to say that they are distracting and detract from the movement occurring in front of them. To that, I would like to return to a moment that occurred during one class. Emma Forstenhausler and I brought in a duet concerning opposition and spatial relationships choreographed using chance operations, with chance operations being a process that allows us to generate scores for material that are comparatively detached from choreographic habits. This isn’t to paint habits in a negative way, but rather to shine light on the opportunities provided by gaining the awareness to recognize and transcend what is familiar to our bodies. The following week, experimental video artist Andrew Gurian ran a movement and technology workshop with our class where we spent the the first two hours of the workshop playing with spatiality through live video recording and projecting using handheld cameras and fairly portable projectors. 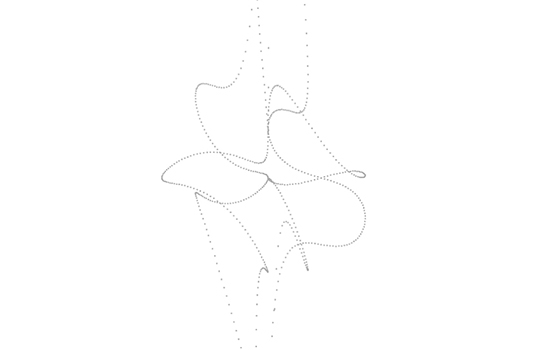 The number of variables we were working with was unlimited and therefore a bit overwhelming, so Emma and I implemented our duet as a constant feature we could return to as we continued to play with the equipment. As we neared the end of a run of the duet, Gurian halted us to question Emma on the focus of the video camera she was holding as we danced, as it was mainly filming the floor. The unsaid implication was that footage of the floor was not worth projecting, that it was boring our viewers. His suggestion to Emma was to change the angle of her wrist so as to show something more aesthetically pleasing to the audience, which works against our purpose in using chance operations in that it conforms to our instinct as performers to project to the audience what we believe they want to see. So, we relayed our discomfort with changing even small details of the choreography created from a score, acknowledging how we felt that purposely altering the camera’s angle so that it would draw the audience’s focus was at odds with our aims for the performance. 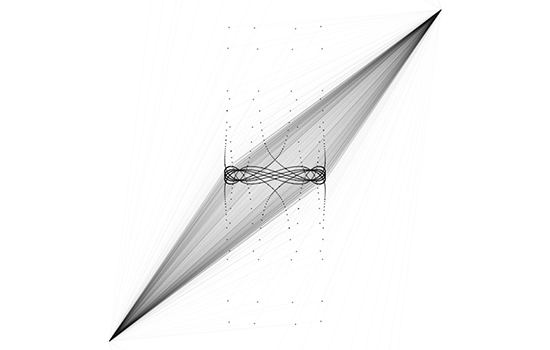 The way in which I have chosen to approach the concept of focus stems from this conversation, and it is hidden, mathematical, and pattern-based. Each of the three main sections involves either a square, ellipse, or quadrilateral being repeated on the screen over and over, and a person can recognize that this is occurring. In an ideal world, I like to think that my audience can learn to shape their own experience of watching my performance by understanding how they can shift their focus away from the screen and back without missing anything; the brain should have the ability to predict the pattern and fill in the blanks appropriately. From a movement-based angle, I am purposely working with either cumulative and repetitive movement to further this notion that viewers do not miss out if their focus is drawn to the screen. 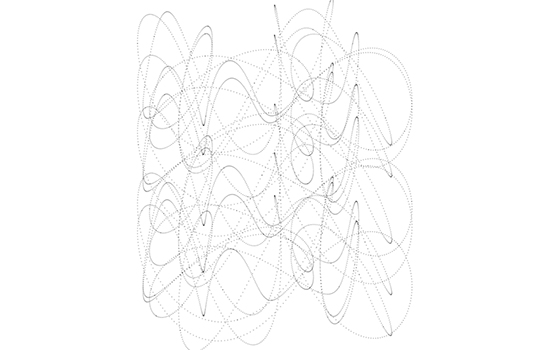 I wish to invite my classmates to dig into what “distracts” them about video instead of creating internal negative consequences for what is simply paying more attention to one aspect of a performance than they do another. I want to explore this notion that technology distracts from movement, but that movement does not or can not distract from the technology. My current choreographic goal, though still shifting, is for the audience to view the media and various movement components as modules being placed in the same space, and so that the focus shifts from how the modules do not fit together to how they can complement each other.