It was a cold late October evening, and the clouds incessantly hindered any attempt by the sun to provide warmth. It was the perfect day to go to a museum and indulge in an art culture I probably would not completely understand. The New Museum on Bowery was exhibiting Pixel Forest by Pipilotti Rist, which I was aware of not because of my vast knowledge of the New York art scene, but as a result of an explosion of Instagram posts of this exhibition. Especially popular were mystical light installations that showed multiple strings of different colored LED lights. Exhibited on three floors of the New Museum, Pixel Forest was an experience that eventually amounted to more than a fascination with lights.

On one floor, an expansive series of video projections were set on the ceiling, subject to many inquisitive eyes staring up, supine from numerous beds. The experience elicited was that of looking at the stars, the audience was relaxed, gazing up in the “massive dreamlike environment enhanced by hypnotic musical scores” [1 New Museum. “Pipilotti Rist: Pixel Forest.”  Accessed October 19, 2017. http://www.newmuseum.org/exhibitions/view/pipilotti-rist-pixel-forest.]. The video showcased underwater shots of seaweed swaying lazily in the water and a woman swimming, her hair mirrored the swaying motion of the seaweed. The radiant projection of the combination of nature and humans was entrancing, and the calming hues of green made an immersive environment.

On another floor, the room was adorned with strings of lights that changed in soothing colors: pink to purple to blue. This installation was the most intimate of the three; I walked through the lights, almost feeling like a part of the artwork. 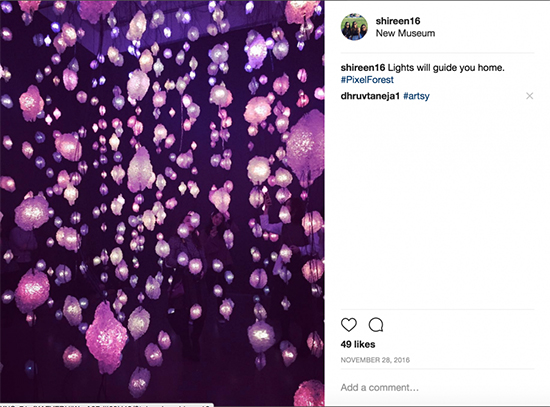 The third work in the exhibition created a comfortable environment, with beanbags in the middle of the room. Viewers sat comfortably on them to view the projections that played with bursts of colors on three of the walls.

Each piece in the exhibit created a distinct environment, and each drew the audience’s attention to a different element of the piece. On one floor, I saw her artworks through a horizontal lens by lying on the beds and watching the projections on the ceiling. On another floor, her artwork was displayed through a vertical dimension: the lights hanging by the strings from the ceiling. The projections on the third floor of her exhibit enveloped me, casting my attention to the three walls. The Swiss artist seemed to have fashioned the artworks for the audience with three different perspectives in mind.

These distinct vantage points to view the artwork seemed ingenious to fully captivate the attention of the audience. I would have never captured these nuances if it had not been for my physical presence in the museum to see the artwork; the spatially immersive qualities of the piece are not conveyed through images viewed on a small screen.

Even though I thoroughly enjoyed the exhibit, what I enjoyed more was posting on Instagram about it, where I added my own picture of the mystical lights. Gauging only one dimension of this artwork through Instagram would have rendered the meaning of this artwork almost insignificant. Even though social media posts may fail to encapsulate or convey the whole meaning of an artwork, they can still hold the power to compel people like me to visit an art exhibit. So did I appreciate the artwork or the idea of it? I wonder if the audience, lured in by the vibrant colors and the most aesthetically appealing part of the exhibit, could justly appreciate the art.

At the same time, I had to question the cyclical journey through social media, to exhibit, to social media. Considering the number of pictures and videos that were being shot during my visit to New Museum, the process of discovery of an art exhibit, for me, and surely for others, seemed to be largely embedded in our relationship with social media. An active participant in clicking numerous pictures to get the perfect shot of the Pixel Forest, I had started and ended my interaction with the artwork through Instagram. I should refrain from make sweeping generalizations but I am confident that a number of people in cute outfits paid for the exhibit primarily to get more likes on Instagram. Multiple shots and angles later, the artwork may only be reduced to its aesthetic value as a prop piece for the social media user. Does art also lose its intended meaning in this case?

When I walked through the strings of lights, I could appreciate but not fully become immersed in the art because of the number of people and the number of flashes from photos. Would the artist have envisioned this reception of her art? Despite the inconvenience it causes for the audience who wanted to understand and appreciate the art, it cannot be denied that the artists eventually enjoy more publicity because of social media. Since photography of the artwork is not prohibited, one could also question the extent to which artists anticipate and even invite audiences who will filter their engagement with the work through social media. Pipilotti Rist’s art reached a massive audience because of social media and earned a great deal of appreciation through posting and reposting the pictures. I have to admit here that I wanted to post her work on my Instagram both because of how aesthetically pleasing it was and because I did not want my Instagram profile to be self-centered, displaying pictures of myself and my friends only.

Just as the curator of the museum must have planned the layout of the exhibit, I tried to curate my Instagram feed, enhancing it with an “artsy” picture of Pixel Forest. Using Instagram as a way to view art may seem superficial but perhaps the validation of art relies on spectators regardless of their intentions while viewing the art. Perhaps platforms like Instagram help in making art less intimidating and more accessible to a wider variety of people.