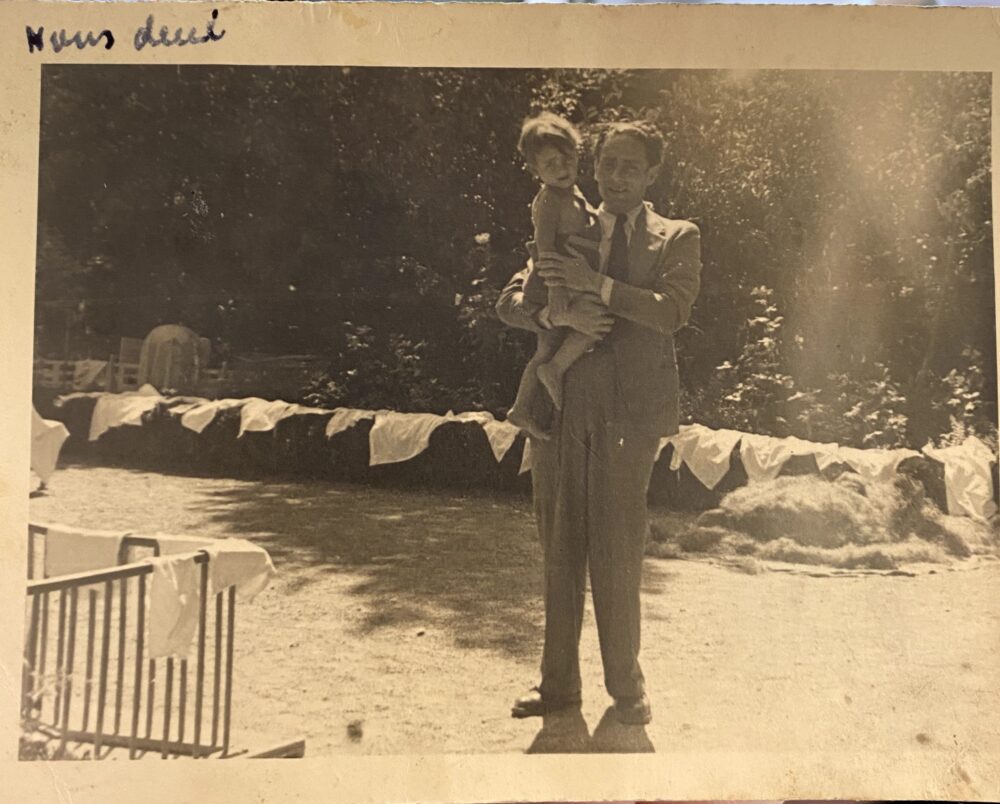 There is a sentiment of stealing that comes with looking at this picture, even if it belongs to my family. What caught my eye, at first, was the central space father and son hold (my great-grandfather, my grandfather) in the frame. I try to read the expressions, maybe unease or wariness in my grandfather’s frown, and in my great-grandfather’s face, not disregard—because he clearly notices his son’s unease, likely accompanied by sound—but a lightheartedness, accompanied by a smile. What strikes me, and leaves me uneasy, or rather, trespassing, is the indecipherable expressiveness in my grandfather’s eyebrows. There is something sous-jacent, underlying, his smile. Naturally it is strange for me to observe this picture and refer to the boy as my grandfather. I’ve known him as a lively and spirited older-man, who shared with me the pleasure of reading and of looking at things for their underlying meaning (and when laughing and laughing when, come what may, they had none). Partly because of this, it’s surreal to intrude on the fragility of a family moment (this is the only picture I’ve seen of my grandfather as a child), but my discovery of it does not constitute the entire fragility of this wondrous picture.

Here my grandfather—based on my poor ability to judge a child’s exact age—must be no older than three or four. In the timeline of a typical family picture, the blurred language one might use would have little importance: “three or four”; but here it is crucial: In 1940, my grandfather was born Jewish. In 1940, Nazi Germany invaded France and took over power, shaming French military strategy, moving in a military tactic of blitz. He was born to Russo-Polish parents who had emigrated from their respective countries, fleeing the harsh reality of pogroms. In 1943, France was not yet liberated, my grandfather was three. In 1944, Normandy was swept up in near-defeat on the Allied side, but the Americans gained as they moved east, and the Russians gained moving west; my grandfather was four. From what I’ve been told, through the blurred and pained recollections of my grandfather, he had been left to a pension as a baby in order for his parents to escape the Gestapo more swiftly. Here, he might be rediscovering his family, juste à peine. His father, in his assured eye, his mother—whom we could imagine took the photo, smiling in return—might both be reentering the normalcy of surroundings, like white shirts drying in the sun. Therefore time to this photo is crucial. It could speak for a smile; one of uneasy relief.

An elusive translation occurs when writing about photography because writing is an act bound by clarity. But one might find a tendril, a curved-way in to the root of this problem, in writing about a photograph and trying to elucidate—trying to say what occurs at first glance. This is going back to the first feeling of   “stealing”  from this picture, the oddity, and the boundedness of its focal subjects to the white laundry drying around them. Shirts, towels, sheets have become the border to a surreal landscape. But their function as individual objects is not essential; what strikes is their crisp blankness, like large lamps illuminating a movie set. The focal point, the two characters in the center, do not beam from the sunlight above, their form brings great shadow. Light barely bounces on their heads but it rebounds on the whiteness of the sheets, and the shadow of a tree behind them does not exclude their starkness. In this sense, because we can only assume implicit knowledge of the scene by the photographed, we can assume that the photographed are “making another body of themselves,” as Roland Barthes puts it when describing posing in Camera Lucida.1 They are posing around these sunbeams. This visual effect, a bath of light contrasted by two shadow-forms that have come to place themselves in the center en contre-jour (backlit, or more literally—in against-light) makes their presence properly tragic. They have situated themselves in a kind of spectral field.

The prominent tactic in fascist propaganda is to deliver a single solution to the perils of society. The agent dissolves any complex understanding of societal issues by offering oneness, both in the solidarity of its likened people and by fighting the single obstacle to a prosperous future. It compels and dispels by disseminating falsehoods, disguising the obstacle as the hidden factor at the root of a stall in progress: a stain. In Nazism, Jewish people represented the prevalent stain; so what moves me after first looking at this picture, somewhat aware, somewhat ignorant, is its affirmation: We are here, in the sun.

But the reading is wrong. Later I ask my grandfather about the picture, the man holding him is his uncle, not his father. All of my interpretations: father and son, father loving in the instant (perhaps later jealous of son, as told by son once he’d become a grandpa), son reluctant to be held, shy to the camera, or sounding some disrepair; all of these now felt off. Yet I had the whole story mapped out, the synopsis was clear. The set-up of the photo, how it played in the politics of a family ridden with the oft-unspoken trauma of genocide, all lost with a simple twist from my initial view. It seems instead all was gained. Therein lies the magic of photography. It is a meaning awash with the demands of the viewer. What was I asking of the image? What was I asking to discover? Perhaps the asking is more important than the factuality (the fact that genealogically it’s his uncle, not his father); and evidently our reading tells us something about ourselves.

I was told stories about my great-grandfather, and my subconscious geared an atmosphere, a language about him; along the way, I came across this picture and I was struck. The underground world rose: the story of a father not given much grief, who forced his son to study commerce instead of medicine (in preparation for psychoanalysis), who was “cassant.” These facts struck silently in the single instant of the punctum and I thought: Here is my grandpa and his father. . .  Photography could then unveil the underground currents that shape our fictions. My first impressions were themselves a snapshot, a second picture. I have to recalibrate, I dig along my memories and my limits. I ask my grandfather lightly about his childhood, I know he had to grieve it, he writes:  “Pour se donner plus de liberté pour fuir les Allemands et la milice vichyste, et pour me mettre à l’abri, mes parents m’ont placé à partir de neuf mois d’abord dans une pouponnière à la frontière suisse—ensuite j’ai été à droite à gauche jusqu’à l’âge de quatre ans.” So he confirms what I knew, he had been a child, or less-than, tragically cast as burden. But, all in the umbrage of childhood, that is—the world of pictures before language, what we don’t know tells us much more; and we are bound, under it all.

I omitted something: “Nous deux” is inscribed above the picture. And like text next to any picture, they change each other significantly. They converse. My initial reading becomes picture+text, and later in mind, they form one. I omitted this earlier, perhaps because the text had become the picture, and it had made it more colorful, given it more weight.

“Nous deux”  is terribly affectionate; it means “us two.” I asked my grandpa about it. Who might’ve written it? He said, a little detached and maybe uncertain, that it was likely his father’s brother. Two words above a picture, a loving tendril.