Mt. St. Helens Vietnam Band was two hours late. I had booked them for a benefit show I put together with a non-profit I helped run at the time. I stood in the parking lot behind the venue, waiting. Their van rolled up; the members began to file out. “Hi, I’m Marshall,” said a short, stocky kid with a hand extended. Despite knowing ahead of time, I was disconcerted by the incongruity of a 14-year-old kid in the context and category of a well-known rock band. When performing an hour later, Marshall made the show. Arms flailing and just destroying his drums, he was the star. I wanted to laugh and gawk at the same time. Laugh because it just looked so goofy: a gangly, cornball of a kid behind an otherwise stone-serious looking band. Gawk because he was so good. Gawk because Mt. St. Helens Vietnam Band smacks with a transcendental quality of creativity as a mode of connection. In front, a tall, skinny, fair-skinned, blue-eyed 20-something; in the back a short, stocky, pimply African American kid. It’s a jarring departure from what one expects a well-known band to look like, an incongruity that raises the question: what is going on here?

At 24, Benjamin Verdoes took legal guardianship of his 9-year-old brother, Marshall. At 27, he was fronting a band with Marshall behind him on drums and his wife Traci playing keyboards. A bassist and guitarist rounded out Mt. St. Helens Vietnam Band. The mathy song structures, bendy guitars, catchy melodies, and familial core of the band led to a record deal and numerous national tours. With a 13-year-old drummer.

When Ben was a toddler, his father died of a heroin overdose. His mother and brother found his corpse in the basement. That initial trauma has reverberated throughout his life. His mother became deeply religious and protective of Ben and his brother. After relocating from their rural Washington home to Hawaii and moving back six months later, Ben’s mother began hosting foster kids. “She wanted to have a really big family, so a bunch of different kids started living with us. It really changed the household dynamic. Suddenly you have these kids who come from some of the most intense situations who show up at your house.”

The foster system led Marshall to Ben’s family. Marshall was a baby and Ben was 14 at the time, constantly moving between different Christian high schools due to his mother’s persistent fear he was falling in with the wrong crowd. Two years later Ben’s mom adopted Marshall, and the family moved to Wisconsin. It was cheaper there, and after his mom half-seriously suggested it, Ben pushed for the move. A disaffected and disinterested 17 year old, Ben looked at his life and decided he wanted the change. “It ended up being a really important decision, one I was really glad I made. I started paying attention in school and made really weird friends. I started to feel much more at home hanging out with people who were confusing and interesting.” Here, Ben started writing songs.

It’s also when he became Marshall’s father figure. He taught Marshall how to play baseball, how to read, numbers, colors, and so on. He taught him drums. “I started introducing him to drums when he was probably three or four. I would buy him drum sets at pawn shops—the little kits made for kids—and he would destroy them.” Later, Ben would jam with Marshall and whichever foster kids happened to be living with them at the time. “A lot of bands formed and dissolved in that period,” says Ben with a laugh.

At 20 Ben moved back to Washington, this time Seattle. His mother followed him soon after. “It was important for her. I had become such a big part of helping raise Marshall, it was strange for him to not have me around. And I think [my Mom] was pretty lonely. It was a strange situation. At that age, most people really want to get away, do something on their own. But it was okay; I really wanted to stay close to Marshall.”

While slowly working on completing undergrad and later a master’s degree, Ben homeschooled Marshall, who stayed with Ben for days at a time. He took him to shows and they jammed. As Marshall got better at drums, things got a little more serious. After performing with Marshall at a middle school talent show and seeing Marshall’s peers’ subsequent adoration, the idea for Mt. St. Helens Vietnam Band (Marshall picked the name) took hold; Marshall begged Ben to start the band so they could play more shows. “I just wanted him to be a rock star, for other people to see him doing what he was best at.” After that, Ben likes to say that things just got out of hand. “We just went with it, and suddenly we were doing tours and opening for all these serious bands, even making some money. For me it was like maybe I’d found a way to have a music career and pay for Marshall’s college.”

In a more literal sense, things consistently got out of hand while on tour. A story from South by Southwest in 2009 is illustrative. Running late, the band pulls up to an extremely crowded venue. It’s hot, packed, chaotic: an imbroglio. Marshall can’t take it and sits on the curb, melting down. He’s sobbing and screaming while the band is urgently trying to get its gear onto the stage. Exasperated, Ben must defuse that situation while directing the band, giving instructions to the sound engineer, and being a sympathetic father figure to the crying child on the sidewalk. Beyond that specific instance, Ben had to walk the fine line of protecting his band mates while being sympathetic to Marshall, who would go through the band members’ bags in search of food and other knick-knacks. “Looking back, it seems insane I held that together as long as it lasted.”

Four years after the formation of Mt. St. Helens Vietnam Band, and two years after I met Ben and Marshall at the show I helped put together in Portland, I was in Ben’s basement, frantically throwing buckets of water out the door. Large quantities of water were flowing out of the floor drain. Gross, dark water. I was in Seattle covering a music festival for a local weekly and had found myself without a place to stay. Ben offered his place up and saved the trip. It was a memorable weekend, the basement flood producing the distinct kind of camaraderie that develops between people coming together to execute futile tasks.

If the basement flood was the high-water mark, the rest of my stay wasn’t any less memorable. Ben is affable, intelligent, a good listener. His girlfriend (now wife) made a large, delicious dinner. I had fun casually jamming with Ben and Marshall. But probably more than anything, the trip was memorable because it was one of the first instances of having my late-stage adolescent yearning for freedom satisfied. I was all alone in Seattle. There was nothing holding me back from doing whatever I wanted to do or going wherever I wanted to go. Later, I realized this was precisely the kind of no-strings freedom that Ben hadn’t gotten. He was always looking out for Marshall.

My visit coincided with the end of an incredibly difficult year for Ben. He had been through a divorce, lost his mother to illness, and Mt. St. Helens Vietnam Band had dissolved. The defining structures of Ben’s life had collapsed. “I just focused on Marshall and keeping myself sane,” says Ben of this period. He put Marshall in high school (who felt ready for the change) and enrolled in a master’s program in education to keep himself busy. It was a dark time. “I didn’t understand what was happening. I went through a really intense depression. Things that had never happened to me started happening around that time.”

Ben tells me that it’s in times like this—of intense, difficult, and formative change—that new relationships and selves begin to form. There is perhaps nothing more conducive to close relationships than the moments when everything is falling apart, and we look around and decide to build something new. Simply being there with someone experiencing intense change can bring people closer than anything else.

It is in this context that new life-defining structures rose from the chaos and depression of Ben’s life. He began playing music with Nathan Quiroga and dating Ifrah. “I made a really, really close friend in a time of insane upheaval. It was both an incredibly devastating time but also this time of really important and beautiful things forming.” Ben is now in a band with Nate called Iska Dhaaf and married to Ifrah.

My visit also coincided with a formative time for Marshall. He had begun playing music with other people and enrolled in high school. Ben now had the space to take care of himself, reflect on the insanity of his recent past, and explore taking his life in a new direction. “I wanted to make different choices, maybe take better care of myself.” The idea of moving to New York took root. Two years later he made the move. At 31, having raised a kid and earned his master’s degree, Ben had the freedom I first tasted at his house in Seattle.

But it’s a different kind of freedom. There’s the novel feeling of not being tied down, of being able to go anywhere and do anything. “I can just go where I please, and I don’t really have to look over my shoulder at what other people are doing. It’s really incredible,” he says. Of course, there’s a depth to the freedom that a given college freshmen doesn’t have. “I’ve done a lot of things that change you, so you’re not as naive to have some of the mental freedom you have when you’re young to be stupid and not know.”

I was drawn to Mt. St. Helens Vietnam Band because they were a traveling tear in the matrix. The performance didn’t make visual sense, prompting me to ask myself why it didn’t make sense, destabilizing and revealing the otherwise invisible fictions that regiment how I live and experience the world, how I decide what makes ‘sense’ and what doesn’t. Because of this, I have learned as much about myself from Ben and Marshall as I have about them. By negating my latent inventory of flagrantly rigid and preconceived notions about what certain people can do and how they can do them, they helped me take stock of an uglier part of myself, helped me begin to challenge and eradicate it.

In this regard, Ben and Marshall’s story is one of powerful resistance. They have fashioned a mode of care, connection, and creativity that stands as evidence against the totality of capital. Their lives attest that not every instant of human experience is commodified and instrumentalized as a lever in the frictionless flow of capital. In performing, they dramatized the evidence; gave it faces, sounds, movements, structures. They made me feel alive with possibility.

Now Ben is 33, Marshall 20. Ben is still figuring out his freedom and what he wants to do with it. “I’ve always had this tension between love and solitude and loving traveling and doing my own thing and being an independent person while also being deeply attached to people.” These things are in flux. What isn’t is how invested Ben is in Marshall and how important that investment is to him.

Marshall recently received his high school diploma. “I can’t think of anything that I’m more proud of.” 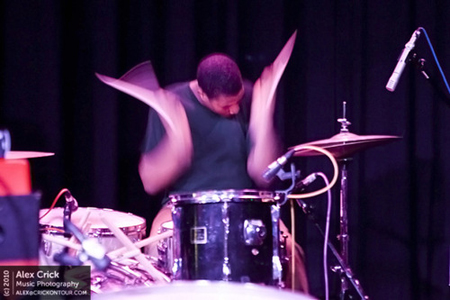