As a visual artist, I love travelling to new cities and seeing which small moments catch my eye. China is a complex and ever-changing nation but what repeatedly struck me in each city was the visible split between new and old. These kinds of contrasts are found in countless cities across the world, of course—but what I found so engaging was how seamlessly the sides fit together into modern China. It is a mosaic of attitudes, cultures, aspirations, and politics that pieces together in a fascinating way. The following images are digital paintings I made after returning to the US based on photographs, memories, and impressions of our time in Beijing, Shanghai, and the surrounding areas.

Our group purchased all the foods in this image within one small neighborhood of Shanghai. Featured: A lemon smoothie, candied hawberries, blueberry Oreos, roasted pigeon (probably?), buns, and dumplings. Though it may seem easy to segregate “Chinese food” from “international/American food,” the reality is more complex. The hawberries, for example, are a classic Chinese treat called bingtanghulu—however they are not local to Shanghai but instead originate in the far north of China. Similarly, the Oreo flavors are altered for the Chinese palate. Nabisco had great difficulty entering the market until it ditched the original white cream in favor of flavors such as green tea, blueberry, and strawberry. 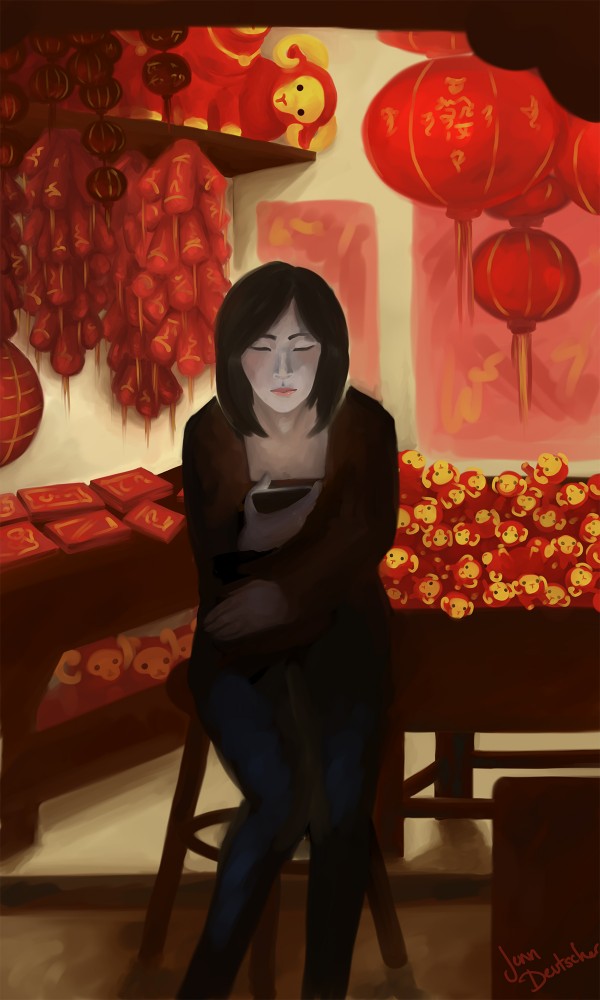 As in the US, smart phones and social media have become staples in the Chinese market. Above, a young shop owner checks her phone. The store behind her is filled with goods for the upcoming New Year—mass-produced lanterns, money envelopes, and stuffed rams (for the year of the ram/sheep). Although aspects of Chinese culture are changing in the face of new technologies and increasing consumerism, other parts remain—temples that are hundreds of years old are still actively used for prayer, certain dates or numbers are particularly lucky (or unlucky), and everything turns vibrantly red and gold for the New Year.

On the residential streets with high-rises littering the skyline. Beijing and Shanghai were full of clusters of skyscrapers that put even midtown Manhattan to shame. Still, neighborhoods of one-to-three story houses remain even in the heart of the city. Real estate is on the rise so the small buildings are gradually being demolished, but for the time being the different sectors create a fascinating patchwork where you can step in and out of a major international city at will.

“Visual Disparities” was created in response to “Cultural Revolutions,” a trip to China with the Albert Gallatin Scholars in 2015. A version of this piece is forthcoming in Mosaic.