“When it comes, the Landscape listens —”
— Emily Dickinson, “There’s a certain Slant of light”

On January 9, 1940, Wallace Stevens writes to Hi Simons: "People ought to like poetry the way a child likes snow & they would if poets wrote it."1 The experience of weather is, to Stevens, an immediate, physical reality. And snow is retroactively in this equation a poem to a child. Wallace Stevens follows his own recommendation in “The Snow Man.” Five experimental readings, alterations, and interpretations follow this introduction, all together in snowy orbit around Wallace Stevens’ poem. 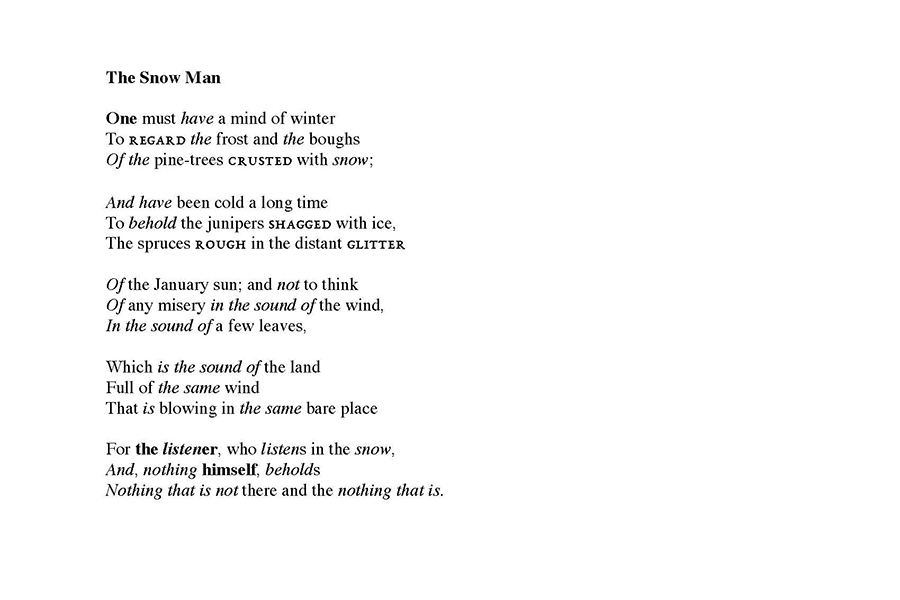 In this first variation, I’ve furthered the typographic inflections added by Helen Vendler to “The Snow Man” by Wallace Stevens in a reading within Words Chosen Out of Desire. Vendler’s visual representation of repetition by way of italics is an illuminating starting position for what becomes a project in tracing formal patterns. Indebted to Vendler, I’ve maintained the italics to iterate repetition, bolded the subject(s)—including, of course, the title—and altered the font of a triangulation of gripping words with some sonic traction in the second tercet from Times to EB Garamond SC, a font that texturally parallels my reading of them. Stevens’ repetition has the remarkable effect of a recycling and/or temporal flattening as opposed to bald emphasis, or even Gertrude Stein’s insistence. The repetition of “behold,” a verb imposing subjective qualification, contains a physical “be hold,” or, so closely, “be cold,” although “cold” is not stated in the poem.“ One must” be attuned to even the architecture of a snowman form: repetition of like-minded snowballs stacked three-high. Further acknowledged but not enacted ideas for play include: connecting likeminded articles and prepositions, cataloging punctuation (or their lack in the fourth stanza), and a topographic mapping—as if the poem were a slice of Earth cake—of the posture of “the listener” directly underneath “the January sun,” items in lines which are both bifurcated by punctuation, almost symbolic of their noun. A near-erasure reading demonstrated in the following variation isolates those snowballing Os which aggregate and “fall” through the poem with an organic consistency. 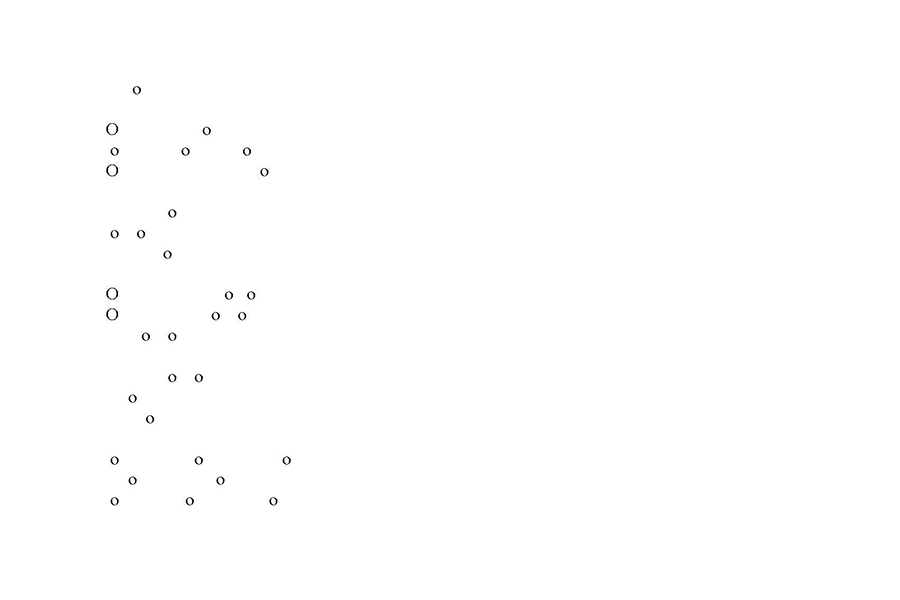 The sound-letter O wears many hats: classical apostrophe, invocation, one wrung of the lyric ladder, affected vowel, a round shape symbolizing geometric perfection, unity, and perpetual continuity, and, more to the point, a facet of “The Snow Man” repeated by Stevens more often than even the tripled “nothing” of the final tercet. Above, I have melted the poem to some odd form out of these Os, maintaining their respective capitalization. It can be argued that the difference here between the O and the o is equivalent to that of the final line’s “Nothing” and “the nothing.” The experiment resembles hovering over a snowman with a hairdryer and letting the top hats, carrots, twig arms, and coal buttons fall sloppily in a puddle of what’s left. Or the action’s opposite, as one can’t help but notice the Os falling like snowflakes or snowballs through what silent space—white noise—the omitted letters haunt. The Os are suspended in time to a utilitarian end as the stalled landscape allows wind to pass through. When read aloud, one must decide the direction of the text, must interpret the movement spontaneously as if it is one of John Cage’s experimental scores. The wind of the poem—expressed by sibilance—passes through these portals as the subject gradually embraces a more abstract, uncluttered landscape. This variation reduces the O to a single sound, heightening a suspended slant rhyme imparted by Stevens. What is one looking at in this cOnstellatiOn? A rabbit with floppy ears seen in profile, listening hard? A sawtooth totem or rock protruding in the white landscape? The page is experienced as its own landscape. 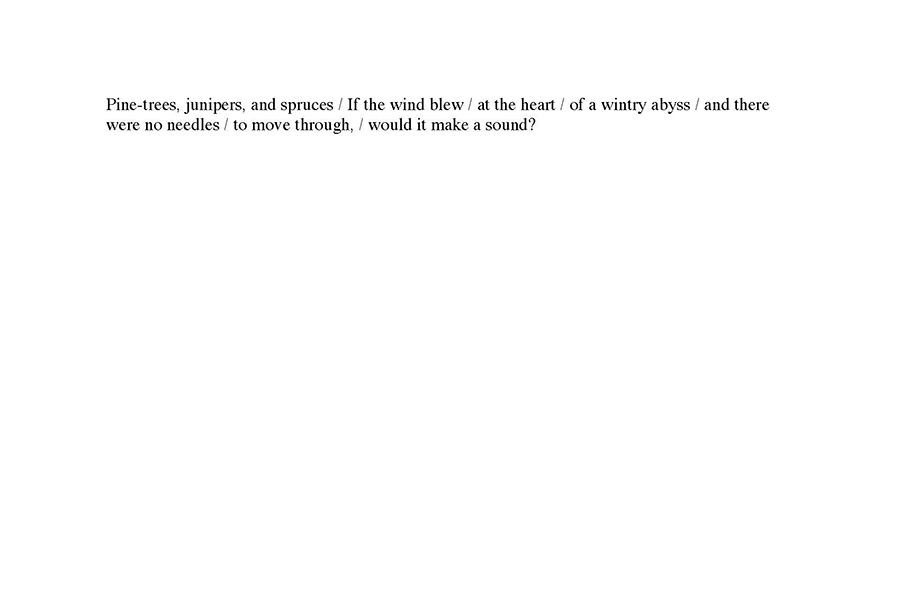 “The Snow Man” is localized immediately by its description of three different iterations of conifer: pine, juniper, and spruce. The significance of the evergreen trio in dialogue with the tercets, repetition of “nothing,” and jagged texture of their respective descriptors is recovered by paying mind to these trees. To lead with plants that remain green through the frost—hence “evergreen”—earmarks an ecological toughness unique to non-human species. Armed with needle-like leaves, the three hardy tree types are known to acclimate to the cold on a cellular level. There is insistence and careful attention paid to the trees in order to recognize them individually beneath their layer of white winter junk. The familial trees are soon generalized as a group by “a few leaves” in the third tercet and unified by the sound they produce rather than their slightly distinct shapes. This casual count (“a few”) of “leaves,” which are better visually represented as needles, is echoed by the reduction of the landscape to just “the land” in the fourth tercet as their differences melt away, not in the way of neoliberal people’s utopia, but rather a vision moving toward a more singular mutation. To consolidate the trees, stripping them of identifying descriptors, indicates their new use as an instrument of the wind. No man or snowman is capable of acting as such a sonic strainer empty of subjectivity and interference, but by experiencing the trees as just their “leaves,” the snowman may ache toward that ideal. 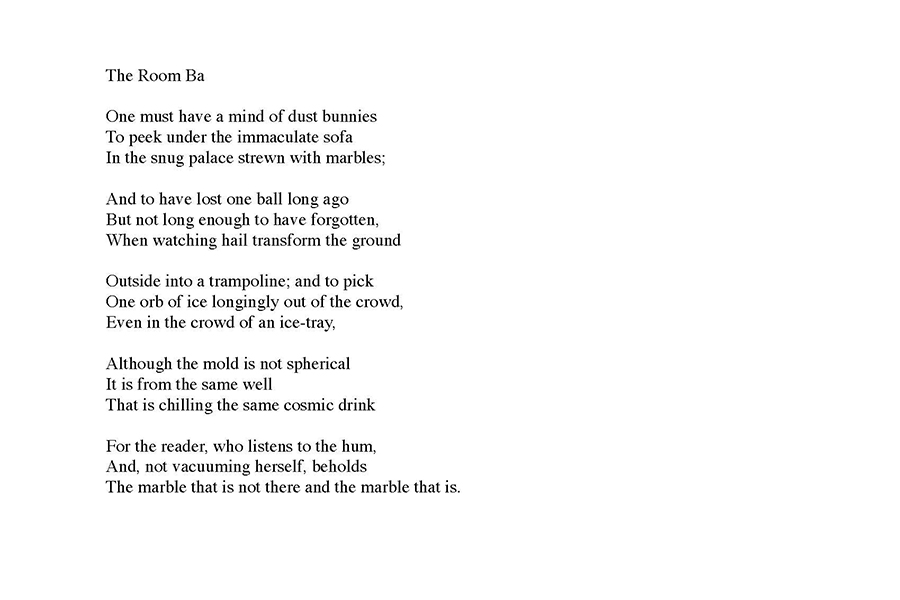 In this variation exercise, I’ve set out to play with various gestures introduced by Stevens in “The Snow Man” in order to better understand the source poem. Stevens’ unity of form and content is lost, as is much of the brain-tease manifested by the relationship between “nothing” and “the nothing” in the final line. However, in their lack, I’ve maintained some chill in the setting, toyed with shape and sensory material, and maintained much of the same form. By separating the syllables of “Roomba”—that robotic vacuum—in the title, I’ve abstracted the proper noun to a set of sounds, such as Stevens’ separation of “snowman” in “The Snow Man,” which is also possibly punned “this no man.” To replace the snowman subject with the Roomba speaks to the meta-mechanical reproduction of Stevens’ poem in this project, not dissimilar to the phenomenon of William Carlos Williams’ “This is Just to Say” poem’s persistent, parodied presence online. 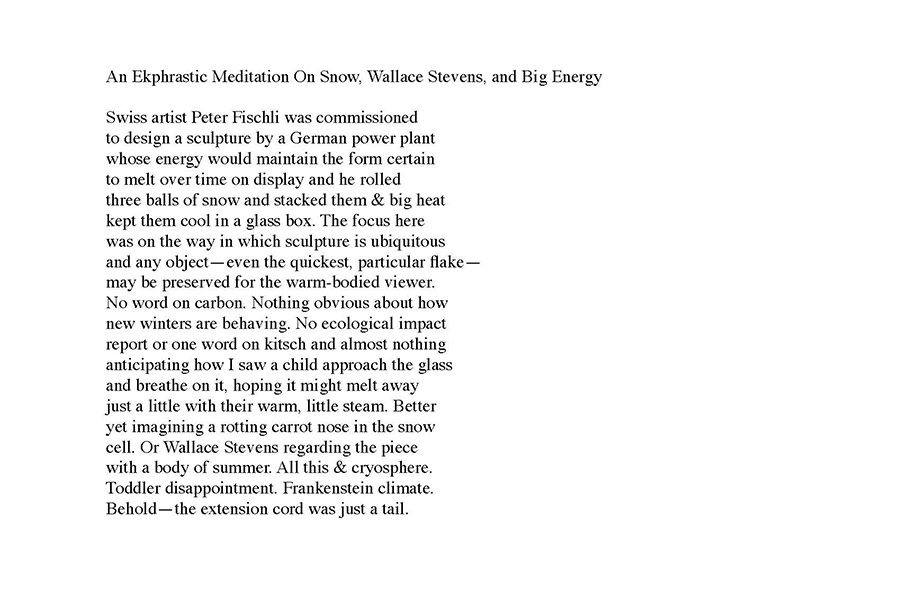 Read a PDF version of the poems