At around 10 p.m. one evening in early August 2012, a group of Syrian activists exited an organizing meeting and crammed into a small sedan in Majdal Shams, a bustling town in the Israeli-controlled Golan Heights. As they drove through the community, the activists scouted for outbreaks of graffiti in opposition to or support of embattled Syrian president Bashar al-Assad. On a steep residential street, the driver pointed out a painting of the black, green and white flag displayed by Syrian revolutionaries. He had painted the flag months before, he said, but Assad supporters had recently marred it with black spraypaint. A few blocks further, a passenger commented on a solid patch of black paint on the asphalt at the foot of a bronze statue. Earlier that week, he had painted President Assad’s face on the earth with the label “step here,” but his political rivals had quickly covered the offensive image.

The drive was the latest episode in a months-old conflict between opponents and supporters of Bashar al-Assad in Majdal Shams. The dispute expressed itself through many forms —from rival street demonstrations to comments on online message boards—but was most visible on the town’s walls. An individual would express one political position through a spray-painted slogan. Then, an opponent of the declared position would paint over the slogan and replace it with a new phrase denoting her or his own position. Over the course of months, patches of concrete developed into palimpsests of political arguments as rivals painted, erased or altered layers of dueling slogans.

The graffiti battle in Majdal Shams is not an isolated phenomenon. At least since the first Palestinian Intifada in the late 1980s, Arab political activists have adopted public walls as spaces for political expression and dispute. Over the past 20 months, graffiti has played a highly visible role in the wave of anti-regime uprisings across the Arab world. In some instances, graffiti has functioned as direct protest. Last March, a group of children in Dar’a, Syria, painted “The People Want the Regime’s Fall” on a public wall. Local police arrested and tortured the graffiti-writers, spurring Syria’s first major protests. Other graffiti serve as spaces for building national community. In Cairo, a series of murals along Muhammad Mahmud Street meld Pharaonic, Islamic, and secular political imagery. The images bring together Egyptian artists and local passersby, who pose for photographs in front of the murals and protect them from authorities’ attempted erasures.

The following images highlight representative examples of anti- and pro-regime graffiti that appeared in Majdal Shams from June through August 2012 (when I was living in the town on a research trip underwritten by Gallatin’s Dean’s Award for Summer Research and Jewish Studies Fund). The photographs are my own; local political activists occasionally assisted with translation. 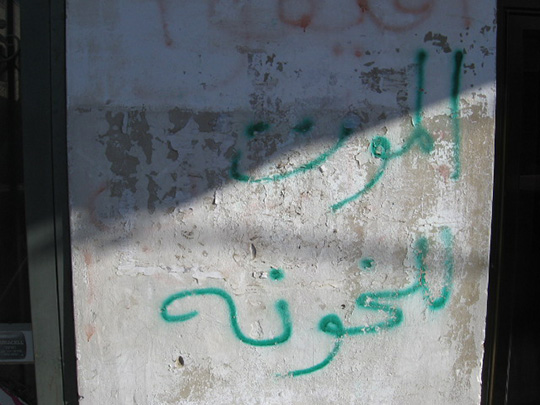 The anti-revolution graffito “Death to the Traitors” has marked one of the town’s main streets at least since summer 2011, when it appeared in Apples of the Golan, a European documentary film about the Golan Heights. Local opponents of the current Syrian regime (the accused “traitors”) never attempted to erase the slogan. It is possible that they left it intact as a means of discrediting local supporters of the regime, who they frequently accused of violence in interviews with foreign media. Often, they labeled pro-Assad neighbors “shabiḣa,” the Arabic word for hired thugs who attacked anti-regime protestors in Egypt and other countries. 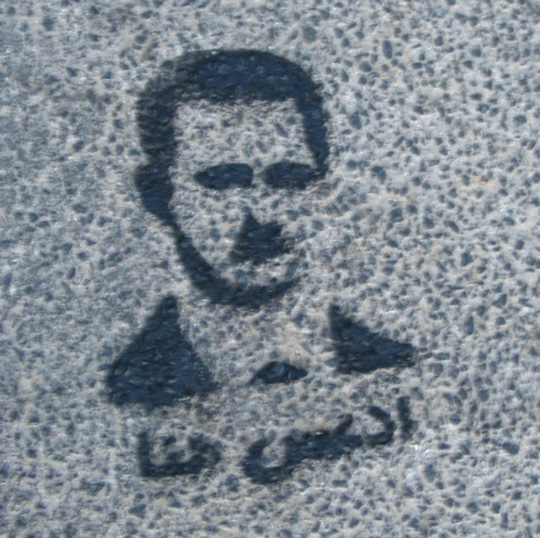 Anti-regime activists began to paint images of Bashar al-Assad with the label “Step Here” on the asphalt at a rally in Majdal Shams in early July. Attendees posed for photographs stepping on the graffito, a symbol of their disgust with the president. Within days, local regime supporters had covered the offensive graffiti with gold paint. 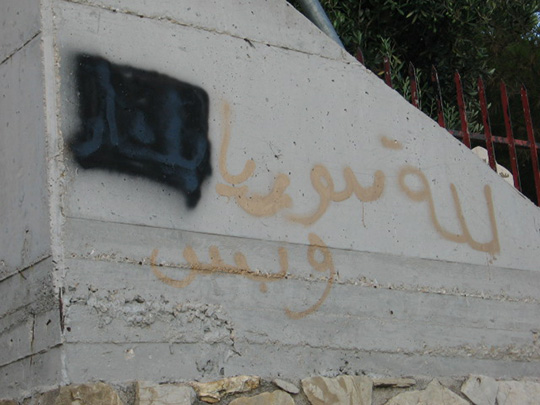 On the same day that they erased the offensive paintings of Bashar al-Assad, regime supporters painted the pro-Assad slogan “Only God, Syria, and Bashar” at the site of the town’s anti-regime demonstration. Reproducing a popular chant heard at local rallies in support of the regime, the graffito introduced a loyalist perspective to a space usually dominated by regime opponents. At a demonstration that week, the anti-Assad activists publicly modified the slogan to read “Only God and Syria,” removing their rivals’ political message. 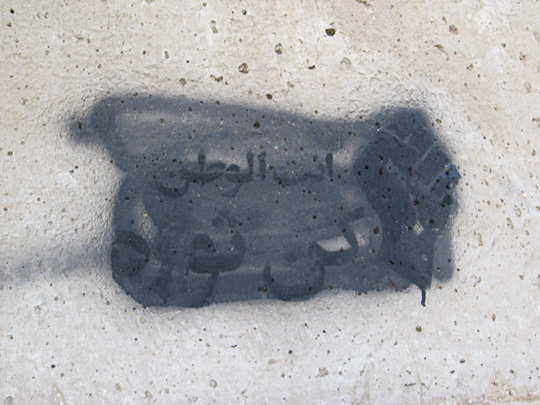 A committee of five young activists painted most of the anti-regime graffiti in Majdal Shams. Their work rarely survived untouched for long: local regime supporters monitored walls and painted over their political rivals’ messages. This overpainted graffito of a raised fist read “You are the Nation, Be the Revolution.” 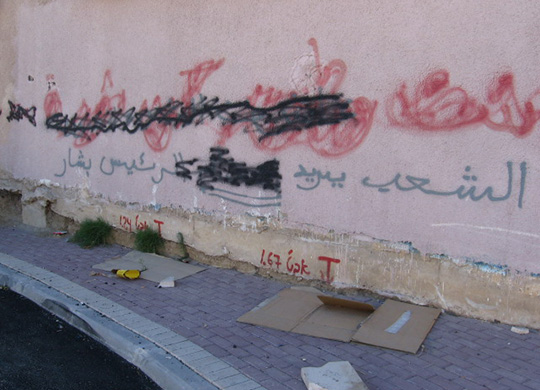 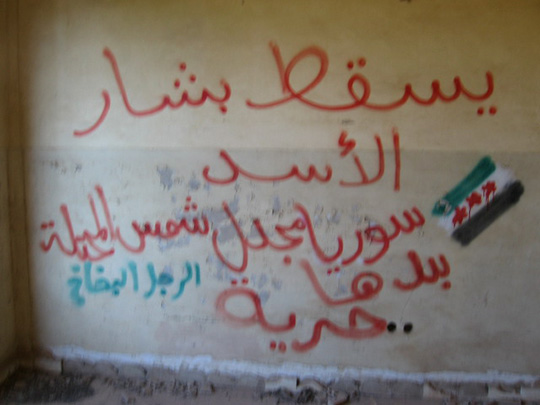 The graffiti battle between opponents and supporters of Bashar al-Assad frequently dialogued with the most significant political movement in Majdal Shams: the campaign for an Israeli withdrawal from the Golan Heights. Regime opponents combined their opposition to the Assad regime and to Israeli rule of the Golan in a single graffito that read “Down with Bashar al-Assad” and “Occupied Majdal Shams Wants Freedom.” The graffiti-writers chose a symbolic site for the message: a ruined compound in the abandoned city of Qunāiṫra that served as headquarters for the Syrian military before the Israeli takeover of the Golan Heights and is now a training ground for the Israeli army.

This research was conducted as part of Julian Phillips’s Senior Project, and funded in part by Gallatin’s Dean’s Award for Summer Research and Jewish Studies Fund.