A look at what some of the consequences of demographic shifts have been in the past:

The United States of America is not called “a nation of immigrants” for nothing. The first wave of immigrants to arrive after the Native Americans, the first “settlers,” originated from Northern and Western Europe. In 1850, the most prominent immigrant group came over from Ireland, mostly due to widespread famine. Xenophobia is not a new occurrence by any means. The Irish were met with discrimination, largely due to the fact that many of them were Catholic. A nativist group called the American Party, (also known as the “Know-Nothing Party”) was formed in order to defend Protestantism and to ensure that those elected to office were native-born. They also wanted to require immigrants to achieve twenty-one years of residency before they could gain citizenship. After the Irish fought in the civil war, sentiments towards them were more accepting[2. “Know-Nothing Party.” Encyclopedia Britannica Online. Encyclopedia Britannica. Web. 22 Dec. 2016.]

By 1880, there were only a small number of Asians living in the United States, mostly in the West. However, they too were met with nativist backlash. The Chinese Exclusion Act of 1882 was passed in order to prevent the Chinese from entering the United States 1 Because of their exclusion, the next immigration wave did not occur until the early twentieth century. Immigrants from this period consisted mostly of the Italians and the Polish. The resistance these groups from Southern and Eastern Europe faced was the passage of the Immigration Quota Act, which was passed in 1921. These quotas were based on 2% of the residents from each nation that were residing in the United States in the year 1890, and because there were not many immigrants from Southern and Eastern Europe during that time, their quotas were significantly smaller than the quotas for British immigrants[4.“Milestones: 1921–1936 – Office of the Historian.” U.S. Department of State. U.S. Department of State. Web. 22 Dec. 2016.] 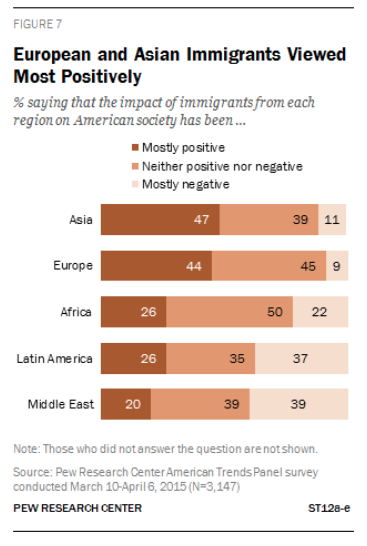 For now, the newest nativist sentiments seem to be the taunts such as “build the wall” heard at at political rallies, a push to deport “the illegals,” and a fear of the nation accepting refugees from the Middle East. It seems like instead of learning from our mean-spirited mistakes, history just repeats itself.

With this project, I aim to humanize those from Latin America that have been subjected to this latest wave of nativist sentiments.

Personal and the Political

“The Last Wave” project was originally created as part of the Fall 2016 Confluence tutorial, taught by Allyson Paty.