“I can’t place your accent – where are you from?”

Since I moved to New York two years ago, I’ve had to answer various iterations of this question at regular intervals. Without fail, at the start of every new semester some classmate stops me to ask about my accent. I would too. When I speak, my inflections are caught somewhere over the Atlantic, wavering between British linguistic quirks (do you say “elevator” when I mean “lift”?) and memories of a childhood spent watching American pop culture television shows (unfortunately, we too have the CW and Cartoon Network in Southeast Asia). Sometimes, I forget to stress-time my syllables and they tumble out in the regular cadence of marching soldiers. That’s usually when the questioning begins.

I’m Singaporean. Like a lot of other post-colonial states, Singapore retained the language of its colonisers post-independence as a lingua franca. English is one of Singapore’s four official languages, and is the language of business, government and instruction in schools. English is my first language, and is the one I’m the most proficient in by far. Perhaps a more pertinent question, then, would be: 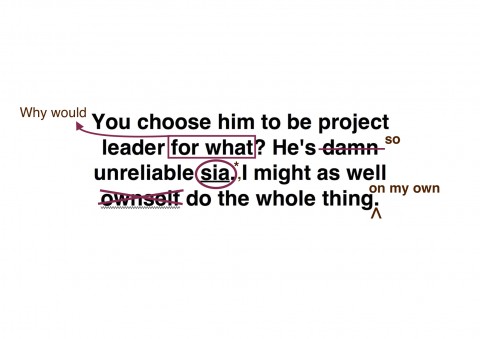 Language is a very specific site of identity formation for me. Like anyone who speaks more than one language or has access to a vernacular, I grew up “code-switching”. In Singapore, this means switching between Standard Singapore English (the acrolect, used in formal or professional capacities) and Singapore Colloquial English, or Singlish (the basilect, used in informal or personal capacities). Like most diglossic linguistic situations, use of the standard variety is a social marker of privilege and usually a result of access to education in Singapore, where the standard is taught and Singlish is stigmatised. In juxtaposition, the use of Singlish is a key in-group identity marker for “Singaporean-ness” and serves to foster closeness and intimacy. I would speak to my teachers in high school in Standard English, but to my classmates or to a vendor in the school canteen in Singlish. Language use and choice in Singapore was about balancing the need for intelligibility with the desire to appeal to in-group networks and appear approachable. This linguistic continuum on which I had to move meant that speaking became a conscious act of interpretation and response.

When I moved to America, this impetus didn’t change. Instead, I faced an entirely different community with different rules of language use, engagement and performance. My American friends threw quips at each other about regional accent differences and linguistic quirks, but I struggled to feel at home in the strange collection of shortened vowel sounds and drawling end syllables. At first, I contemplated deliberately assuming a Singaporean accent whenever I spoke – a half-formed attempt at decolonising my speech and space. However, I soon learned that the syllable-timed cadence of my speech, rapid tempo and lengthened vowels was difficult to understand. Singaporean Standard English is intelligible to American speakers by any definition of the word, but the lag in comprehension and proclivity for misunderstanding made it difficult to persist.

Language, as a system of communication and interaction, can be defined as a discourse within which signs and signifying practices are sites of struggle characterised by conflicting claims to truth and power. When we speak, we negotiate our sense of self in relation to the world. I choose to negotiate my Singaporean sense of identity separately from my identity as an Asian woman in America. This doesn’t mean that the two are mutually exclusive – I am and always will be, Singaporean first and foremost – but that I face different social compulsions and conflicts in New York than I do back home, and live and engage in a different community with different rules and norms. In Singapore, I am part of the Chinese majority, where my relative privilege gives me a position of prestige in terms of language use, performance and social power. In New York, as a woman of colour I am racialized into existing tensions of racial identity and expectations, superimposed into current narratives of stereotypes and empowerment. My choice to engage differently doesn’t change who I am nor does it inhibit my ability to speak either Singaporean Standard English or Singlish.

To answer the question: I speak like this because I think about language as a conscious act of engagement and identity performance. My words and accent are reciprocal products of the in-group demands and narratives that exist in America. I don’t see it as a betrayal of my Singaporean identity or as a neocolonial aspiration towards Western standards, but merely as a choice to remain intelligible and correspond to the social networks of my peers.

After all, I am still perfectly capable of switching between Singlish and Standard English back home – I wouldn’t want anyone saying that I jiak kantang.

*This project aimed to explore the notion of “code-switching” through back-and-forth translations of written and spoken sentences. I wanted to interrogate the tension between speaking intelligibly within a foreign community and being “authentic”. The project included a chain translation of a sentence – to and from Standard English (as perceived by the interpreter) to Singlish. This “broken telephone” of translations was motivated by a desire to understand code-switching across linguistic boundaries and the imposition of a linguistic “standard”.

All the translations were provided by Singaporeans living in America.