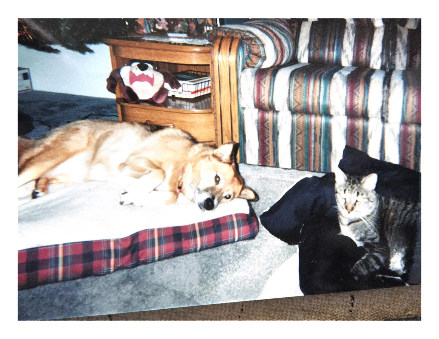 I tiptoed to my mother’s side of the bed. I was just tall enough to be level with her face.

“Mommy?” I repeated. Her face scrunched up in a disoriented response.

“Hm?” she grunted in response.

“Mommy I think my death-of-scope is broken.”

Unamused by the early-morning reminder of my inability to pronounce stethoscope at four years old, I received another grunt.

“Mommy you have to come fix the death-of-scope now!” I whined, in true toddler fashion.

“Honey, please just go fix the stethoscope,” my father mumbled, his back turned to my mother and me.

I began running down the hallway in my Cinderella nightgown the moment my mom started pushing her covers aside. I was quietly laying out my Fisher Price medical kit when she got to the living room. With my back turned to her, I unwound my stethoscope and began my demonstration.

My first memory of death and dying is this: performing a toy checkup on my dead dog, Tempest. Being four years old at the time, I didn’t know I was supposed to be worried by Tempest’s lack of response to me poking her with toy syringes and peeking into her ears. I didn’t understand why my mom ushered me into the kitchen and left to get my dad instead of trying to fix my stethoscope. As far as I was concerned, this unsupervised time in the kitchen was the perfect opportunity to sneak some early-morning Cheeto puffs. I didn’t understand why my dad ran into the living room, nor did I understand why my parents looked so sad when they returned to the kitchen together.

My new mind had yet to be filled with the unknowns of death. I was more upset about the fact that I wouldn’t have a patient to check on for morning rounds than the fact that Tempest was going to be gone forever. I could understand that I had a dog, I loved the dog, the dog died, the dog would not be coming back, and that I had performed her last checkup and morning session of snuggles. Tempest was dead, but I would be okay.

Five years later, death would return in the form of a winter tragedy. Our neighbors were a Hatian-American family of eight, with Deborah and Phillipe being the youngest. Phillipe and I were in the same 2nd grade class, and Deborah (the responsible 3rd grader) always kept an eye out for her little brother. Between shared walks to school and trips to get cookies from the community center after school, we became friends. That January, Deborah and Phillipe were going to miss a few days of school.

“My Papa says we have to go back to Haiti to see our family,” Deborah shared.

“But what about school?” I asked, confused.

“I don’t know. My Papa said not to worry about it,” she replied. I shrugged.

Deborah and Phillipe would not return from Haiti. Our neighbors–Deborah, Phillipe, their father, and four other siblings–died in the devastating 2010 earthquake. Their mother was the only member to survive. I was forcing on my pink twinkle-toe sneakers when my dad poked his head into my bedroom, still in his work uniform.

“Daddy it’s Tuesday, I have to get my shoes on to go next door,” I replied, struggling to squeeze my too-wide foot into the shoe.

“Just. One. Second,” I replied between a few final tugs on my shoe. I sighed dramatically, my tiny arms finally relieved. My dad didn’t laugh.

I shuffled over to my bed and sat down across from him, fixing my stuffed animals that had fallen over.

Every Tuesday afternoon, Miss A., Deborah and Phillipe’s mother, would sit on her soft, worn-out, green loveseat for hours, braiding her children’s hair and telling stories from her childhood. I don’t remember how I became included in this weekly tradition, but every Tuesday night, I would arrive home with a head of teeny-tiny braids and stories to tell at dinner.

“Well, uh, you know how the neighbors went on a trip to Haiti?” he asked.

“Well, Max, there was an earthquake, and Deborah and Phillipe didn’t make it.”

“Didn’t make it where?” I asked innocently.

“Back. They didn’t make it back. Honey, Deborah and Phillipe didn’t survive the earthquake. They’re okay, but they’re in Heaven now.”

“How do I give Deborah back her butterfly clips? And, I think Phillipe left some of his Hot Wheels in the living room,” I continued.

“Don’t worry about the clips or cars, okay? Your mom and I will take care of it.”

“Oh. Okay,” I said, promptly heading back to my closet to pry the too-small twinkle toes off my feet.

I never asked my parents if they thought Deborah and Phillipe were really in Heaven. Occasionally, I tried to imagine what their life was like there. Was there an endless supply of butterfly clips? Were there cool Hot Wheels race tracks? Could Deborah and Phillipe play with cats without breaking out into hives? Did their TV get Disney Channel? I hoped so.

Being nine years old, I didn’t understand the big deal about death. Even though I still wasn’t totally convinced there was a man upstairs keeping track of how many times I watched Lady Gaga’s “Bad Romance” video, I did believe in an afterlife. I genuinely believed that Deborah and Phillipe were in a better place. I didn’t know what that better place looked like, but I hoped it was good to them.

Deborah and Phillipe were dead, Miss A was alone, my hair wasn’t braided, and my shoes were too tight, but I was okay.

Seven years later, death, once again, entered with a knock.

“Hey, uh, your Aunt Margarette died. The wake will be on Thursday and the funeral on Friday. You don’t have to go to the funeral, but we are going to the wake. Dinner will be ready in a few.”

I stared up at my mother.

“No, yes, Mom, I know Aunt Margarette. But you just put dinner and her funeral in the same breath,” I interrupted.

“Oh, sorry,” she said, swiftly closing my door and returning to the kitchen.

My Aunt Margarette had quite a history with hospitals. She smoked almost nonstop, she ate the wrong foods, she hated exercising, she had a laundry list of health issues, and she was notorious for consistently ignoring her doctors’ orders. “There ain’t a damn man on this planet who can tell me what I am or am not gonna do,” she would say.

As ashamed of it as I am now, I wondered how much longer she might have lived if she would have just stopped smoking or used her oxygen or eaten some more vegetables or went on a walk around the block every once in a while. But, as I was standing at her open casket, her husband and daughter choking back sobs in the row of chairs behind me, I was beginning to understand how my perspective was all wrong.

Maybe she would have had more time if she followed her doctors’ instructions, but maybe she wouldn’t have. Maybe she still would’ve died on the same day, at the same time, regardless. Her death was not some personal failure to stay alive. Her death was not a defiance of modern medical practice. Her death was just that: a death. She can’t be blamed for something that was going to happen anyway. Her personal choices regarding her health don’t make her death any less final than the next. Leaving behind a closet full of unused oxygen tanks, Margarette was dead, and nothing was going to change that.

Now that I was living in a multigenerational household, death had become a regular topic of conversation.

“When I die, don’t you let them turn me into a vegetable,” my nana says, loading steamed green beans and carrots onto her plate.

“Yeah,” my youngest brother chimes in, his mouth full of half-chewed food.

“Dude, you don’t even know what we’re talking about,” I reply.

“No, little boy. We’re saying if we’re already mostly dead, just let us die! Don’t hook me up to all that crap just so y’all can see me lay in bed forever. Just let me die! Now eat your vegetables,” my nana counters, but she is not yelling with anger or aggravation. She has a smile on her face, laughing in between sentences.

“Yeah,” my mother punctuates, ending the conversation and scooping more vegetables onto her plate.

Thanks to my grandmother, death is no stranger to our dinner table. Her half-joking comments about dying before the world ends or becoming “worm food” have welcomed casual talk of death into our home. It’s not morbid or dark to express a desire for a lively party in place of a traditional funeral, nor is it foolish to hope there is a Heaven. Even though she doesn’t identify herself with any particular organized religion, she still sees religion as a way to both prepare and cope with death and loss. While we can exhaust every medical resource at our fingertips, there is no magic pill to speed up the grieving process or instantly prepare us for death. So, who is to say any particular view of the afterlife is right or wrong if the very belief in an afterlife itself lessens the fear of an inevitable death?

Even when I regularly practiced and attended religious services,  I did not give Heaven a lot of thought. Eight-year-old me didn’t sit in Sunday mass thinking about how awesome my life after death would be with God if I would just stop stealing Oreos from the cookie jar. My stubborn self took everything as a mere suggestion, because, as far as I was concerned, the only person who could tell me what to do was my mother. But, the older I got, the more skeptical I became of living a restricted life in hopes of experiencing a heavenly afterlife.

What if nothing happened after I died? Could this supposed afterlife really be that much better than living on Earth? Was God really going to deactivate my keycard to Heaven if I didn’t identify with my sex as assigned at birth? How could I know for certain that I wouldn’t burn in Hell for an eternity for kissing other boys on the playground?

I was too afraid to ask the Father any of these questions. In fact, I never asked anybody these questions. The older I got, the less sold I was on the idea of devoting the only (known) life I have to an invisible man in the sky. It wasn’t that I couldn’t buy into the idea of a God or an afterlife; I just couldn’t imagine a supernatural force having specific entry requirements to a pleasant afterlife. I used to understand this disconnect as proof that I am not a religious person. However, especially in light of the Covid-19 pandemic, I know that’s not true.

Deep down, I hope someone is listening when it’s 3:00 a.m. and I’m stressed beyond belief, crying over chemistry or tearing up at the thought of my mom or brothers or grandmother dying. I hope someone is listening and protecting my brothers and grandmother, all of whom are at higher-risk of a serious infection from Covid-19. I hope that someone or something is listening—is sharing the emotions that I feel I can barely carry—and I hope that there is an afterlife that rewards me for getting through it all.

I hope the first moments of the afterlife are as my last moments with Tempest.

I hope that, as I rested my head on Tempest’s body and thanked her for being such a good patient, the afterlife is a thank you for enduring whatever came before.