The work of Loie Fuller, a modern dancer from the early 1900s, can be found in the miniature movies that music videos have become. Fuller’s emphasis on extension of the body appropriated in popular media can be seen in “Mine,” (2013) a video project directed by Pierre Debusscherre for Beyoncé. You don’t need to watch a video or a gif to see how the video changes the experience of movement. Screen grabs from Beyonces project “Mine,” and Fuller’s “Serpentine,” are helpful here in negotiating and exploring what comes to the light with the intentional use of color, shadow, and lighting.

Loie Fuller was a modern dancer before different modes of dance had challenged ballet successfully in the United States. She lived from 1862 to 1928, was born in a small town in Illinois, and she was arguably the forgotten mother of modern dance. She was born before electric lights and died when coloring was still being added to photos post picture. She pursued her career in Paris and preferred to danced alone. She used garments made of silk and extra fabric to take up more space. Her passion for Greek mythology inspired her to lead a dance movement centering the body in emotion. She was the first to use light as a compositional element and utilized shifts and ebbs in color when only the body, song, and words had done so before. 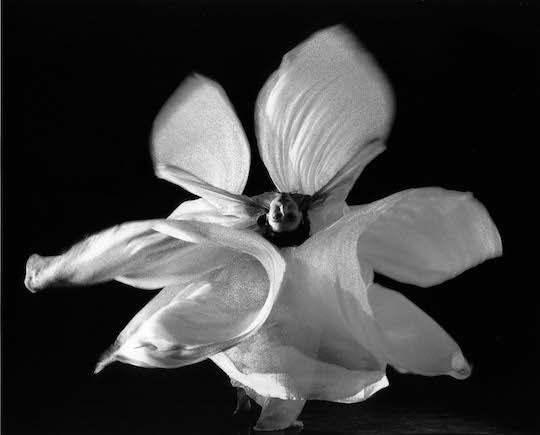 Loie Fuller can be seen dancing here in one of her most successful shows called "Serpentine."

Watching the latest Beyoncé music video, “Mine,” directed by Pierre Debusscherre, I thought, We do strange things to tell the story of our emotions with our bodies.

The way a Fuller show was formulated, the mystery of how the fabric caught the light, the science of color hues and angles, and the stage built just for her performances was equally important to the final product. It refused replication and invited awe and appreciation. Fuller used light as an element of change that complicated the way a dance could be understood. She was the first to use projected color on sheets as costumes. 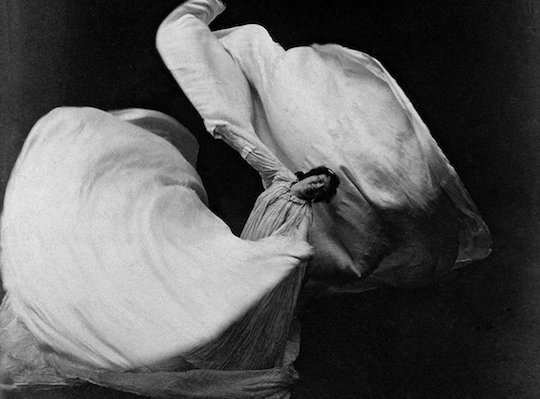 Loie Fuller poses here in a move inspired by one of her most successful shows called "Serpentine."

The way she danced can make the audience feel like the fabric itself was dancing and that the dancer and the cloth were one. A Fuller show could contain yards of gown that would fan and billow at the swing of her arms.  Her choreography and shows were aesthetically captured in the Art Nouveau style as swirls of garment and splashes of paint. Although her garments were never actually sheer, the posters made about her shows would imply you could see through her gowns, adding a risque edge to the advertisements.

The use of Fuller’s work can be seen in the uninterrupted flow of the body and the movement of the fabric. Here “Mine,” builds and transforms the productive efforts of a show by controlling time (slow motion, hyper speed or even the ability to screen grab) to emphasize the dynamic emotive potential of color on the moving body. The video builds on the performance itself by offering another layer of experience, play and control to the production of the art. The art does not arrive unscathed on the other side of the lens but grows different with what the producer chooses to emphasize. In “Mine,” the color is not as central as the movement itself, with the models in muted tones and the fabric in various shades of nudes. What matters at all is that the body is moving with color and light to emphasize this movement. What mesmerizes me is that the body is made smaller by extending the fabric, but what the body draws our attention to is made larger. 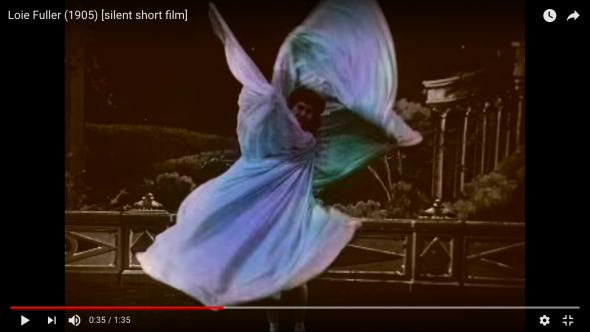 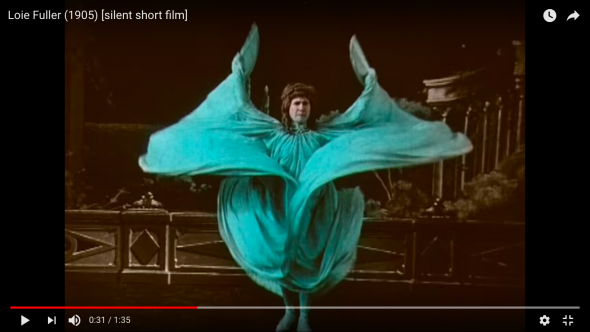 Both show and video feature a pitch black background, making the presence and focus on the subject in the center more striking. The glowing effect of the garment is achieved by using particular fabric that catches the light. In Fuller’s day she had to paint silk with fluorescent paint and used several tech hands shining different colored lights at various cues to achieve the mesmerizing effect of projection. “Mine,” too relies on unseen labor for it’s effects.

Video editing is used to slow down the movement of fabric and cloth used to extend the body. Both the theater then and the studio now can be spaces of high production value and high fashion that make seamless months of human work and energy.

Maybe the legacy of a craft cannot be controlled but significance of Fuller’s work, the work of the camera and the eye to captured movement or video, reflects the deeper all-too human urge to capture emotion via color. The work of Fuller has become a part of the way photographers and musicians engage human emotion and the depth of any story. 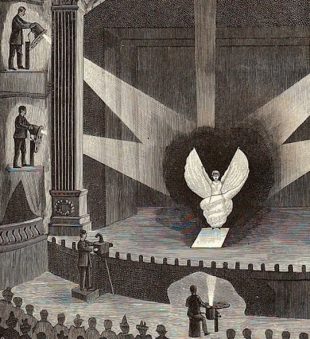 A drawing depiction of how to cast light on Loie in the Loie Theatre in Paris. 1900.

Explore the archives at  New York Public Library of the Performing Arts.

Check out the work of Jody Sperling, who uses climate change and “kineshere,” (expanding costumes) to engage Loie Fullers legacy.

Watch the award wining movie inspired by the dancer.

Donna Gary is a contributing editor for Confluence Fall 2018. She wrote this piece while taking the "Writing For Confluence" tutorial and the " "Modern Dance I" course.