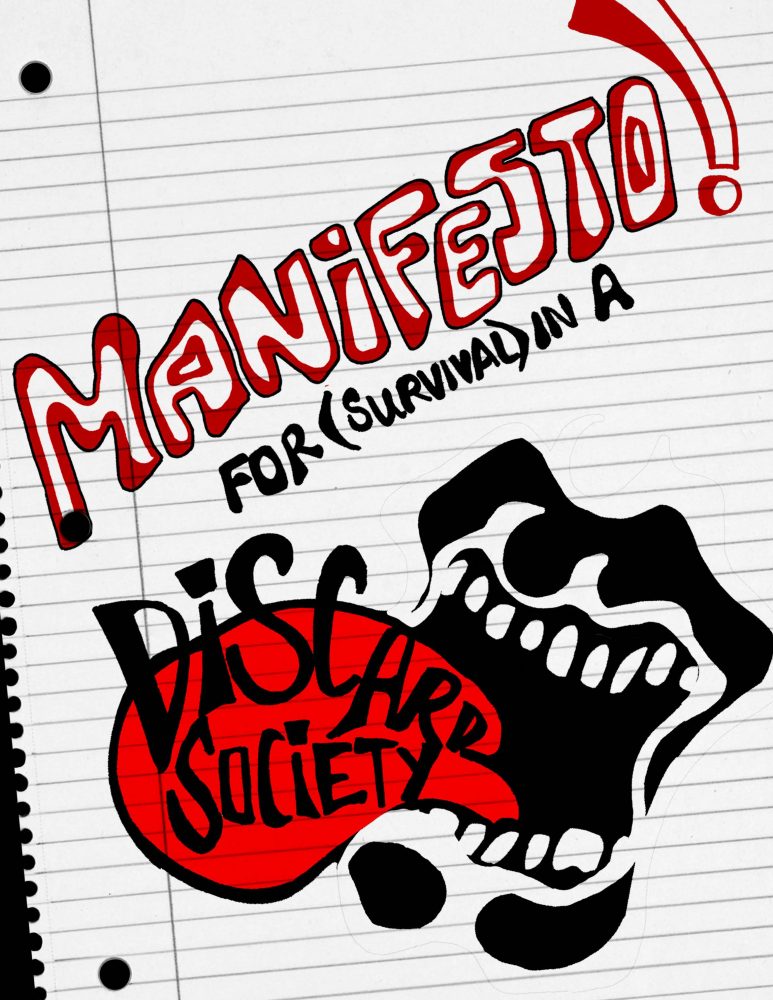 Written below is a mind map of sorts. My hope is that people try their best to take in what they identify with and use what they need. But most importantly, I hope that people see that I am taking notes—my own, personal notes, about a wide range of things. Your notes might not take the same color or shape as mine. But do take notes. Our house is made of many worlds. I want to hear about yours.

In part one, I start laying out what I identify as our discard society: a society that is predisposed to the act of disposal, a society that impulsively throws things out and casts people aside. This kind of society has affected all of us, within our psyches, and in how we live and love and play.

There is a kind of no-industry-left-untouched capitalism that operates today, where advertising impedes all forms of life, including our leisure and our love lives. In a system like this, how much can we truly act with autonomy? When people have a lack of faith in their world-changing abilities, they give up. Social movements today can too easily become aesthetic and “post-able” rather than fruitful and regenerative.

In a world of things bought, used, and then ultimately stored away at the landfill, we start to view the world through the lifecycle of our things rather than the lifecycle of people. We live in a world where new things are quickly ushered in and then effectively booted out. Our market changes faster than the tide and we’ve created with it an obsolescence of desirability. The bigger, better, faster phenomenon is what we constantly seek. Everything has to be “New and Improved!”

But above all, structural inequities have displaced people and made entire communities disposable. What Foucault refers to as biopower is the institutional ability of our world, how people are dominated under systems. Prisons, education systems, the housing industry, healthcare and corporate America are all powerful actors, but the individual is often at the mercy of these systems, fighting them and trying to work with or around them. Too often these institutions hide behind their performance and civic responsibility, and in cases of privatization, they can be brutal to individuals. To know our house is to know these systems. Just like slavery has robbed the world of millions of creative, intellectual and individual minds, the ebb and flow pipelines of industry have carried endless potential off to sea.

Part two is a manifesto for survival in the discard society. It provides a framework for helping ourselves, others and ultimately saving our environment.

I. Understanding the Discard Society

Understand the house you live in. Mine has structural problems.

One unit of symbolic noun-manship. A single nation under God, indivisible—yet we’ve been applianced under globalized industry. PersonPlaceThing. Are they actually distinct or self-determining?

Place is land dispossessed from people (shafted for cash)
Thing is made, marketed, sold (to, by)
Person who assembles, desires (and pays 4 it all).

All 3 are dominated by Capital.

Joyless because our mountain of trinkets, gizmos and oojamadoos have amassed above our heads and further toward a polluted heavens. In excess, our stuff (plural, plastic, superabundant) becomes a thing whose shadow we sleep beneath. The thing is sublime so we become inconsequential, tiny in the presence of what we’ve created, fated to the grave of poisoned, synthetic dirt. Buried by our stuff.

We know this deeply in our bodies. Most people can agree on a mounting anxiety within the modern world. Buzzfeed can tell you all about it.

Thinking about anxiety: Anxiety as an annotation of despair. Deep cuts into our collective skin. Too many of us see democracy as a failed experiment. We’ve let our voices of protest and resistance whittle down to aesthetics. Our agency, our power to reshape worlds, is in question. Knuckles and bones appear too mortal to crumble a cruel concrete.

So we fill emotional vacancies with impassioned purchasing. Hearts ache for liberated worlds but our minds settle for Facebook. We settle for “Let’s just live the good life.” Buy a car, a house and a trip.

Thinking about blackness: If America longs for democracy again, blackness has longed for it longer and harder and with blood. The black vote feels titular. Our say has been hacked, our black voices pacified.

And our black bodies are trapped in phantasmagoria, routinely appearing and disappearing, like the municipal pickup of our trash. Call it the revolving door. A prison pipeline. Or call it a killing.

Noun: Place
Black people have always been dispossessed from Place, because Black and Place are mutually exclusive in the eyes of the law. The gathering of black bodies is criminalized. The black public square never existed. It’s too transgressive, ripe for revolt.

Gone are the days of any American public square. Gates have been erected. Discourse has been quelled. The pipeline of information is personal and quiet. Silent even. Companies whisper in our ears. They’ve mined our brains for “likes.”

Our minds are the new frontier. They are public sites now, tender for weaponization. We’ve traded mental autonomy for the direct-to- consumer-one-to-one-individualized-marketing-stream. We call it the personal feed. Freedom of thought has been capitalized by “freedom of choice.”

Whole milk?
How about 2% milk?
Low fat milk?
Or maybe…
organic milk?
Or what about skimmed milk?

It’s called a feed for a reason. We’ve been domesticated by the trough. We lap up what is put in front of us, without batting an eye. Never stopping to question the hand that feeds us.

But can you blame us?

Allegories of capitalism: Rest is earned, and specifically occurs in the time when you “reproduce” yourself for more work. However, our 21st century rest is a status update, or perhaps Teen Vogue’s “10 Best Climate Strike Posters.”Our rest is now a superstore. My rest has become a kind of passive entertainment. A space for rest has become a space for advertising. And companies are good flirts.

Pleasure is earned too. Packaged and bundled. You can find yourself on a cruise and learn how to feel alive for a price. Capitalism has figured out a way to sell us Experience.

The gag is that our pleasure has always been colonized. Historically, our black bodies in America have never been our own. The marginal body has unlearned its pleasure. The black woman’s body has never been her own. So, let’s dream of a black Venus.

Plastic culture is more concerned with our disposability. Systemic disregard of Person. Just think about where they placed the American dump.

I know I sound angry.
But trust me,
please believe me,
when I say,
I’m really a very pleasant
Angry black girl.

II. Fight to be salvaged

How do we emancipate ourselves?

Learn how to dream. This world was imagined, dreamt up and contrived for the elusive figure we call the white man. The “White Man” is an institution of ideas, structures and frameworks that benefit one mold of Person.

(Noun: Person) WHITE and MALE and CISGENDERED and HETEROSEXUAL and WEALTHY and ABLE-BODIED.

But the White Man should not to be confused with any living, breathing and working individual. Sure, we could think of a problematic few, but to aim our anger at one person is to miss the entire point. Know your house, and dream of its renovation.

How do we dream?

We do this: transform ourselves to transform the world. Learn how to de-pollute our bodies and our minds in order to re-imagine a reality that can care for us as well as we do, or better.

Fill our emotional vacancies with warm black-eyed peas and cool, lead-free water. Lick our emotional wounds. Understand that personal matters are important, political and urgent. Take care of ourselves. Laugh loud and hard (remove the laughter bucket). We forge our own spaces.

Pleasure seeking for marginal identities is a radical and necessary form of joy; the world does everything in its power to strip marginal individuals of sustenance and continually deny their existence. What is it about pleasure that subverts domination? Pleasure is anti-colonial, wide-eyed and alive. Pleasure and luxury don’t have to be synonymous.

Be angry. It’s okay to be angry. But realize that anger is a labor of emotion. The most weary and oppressed people already labor enough, needing to work long hours and hard nights in order to sustain themselves. A political kind of joy is likely more accessible to them than a political anger.

Be angry but not for the spectacle of it. Use anger to find methods of transformative justice.

Think like the subway dancer. He transgresses public spaces not meant for performance. He uses every drop of sweat and bead of energy inside him to transform a space of transportation that is utilitarian. And he is also a marginal body, working outside of the market economy, often as a result of being rejected by it in the first place. But he has a damn good time. He just needs to watch out for the cops.

It’s time we shed our self-loathing, our shame and our abjection and acknowledge that we’ve unlearned how to dream.

What if we dreamt through the process of art-making? Art can reveal our reality to ourselves and others by making the invisible visible again. Additionally, art holds the power to build worlds that don’t exist in a dialectical reality. Yet—let’s use art forms that help us, as marginal bodies, insert ourselves into the ethos of history and future-building.

The Afro-futurist, street artist and eccentric human being Ramellzee said that the only way to destroy a symbol is with a symbol. Let’s use that.

A society, in turn, depends on certain things which everyone within that society takes for granted…What societies really, ideally, want is a citizenry which will simply obey the rules of society. If a society succeeds in this, that society is about to perish.—James Baldwin, “A Talk To Teachers” (1963)