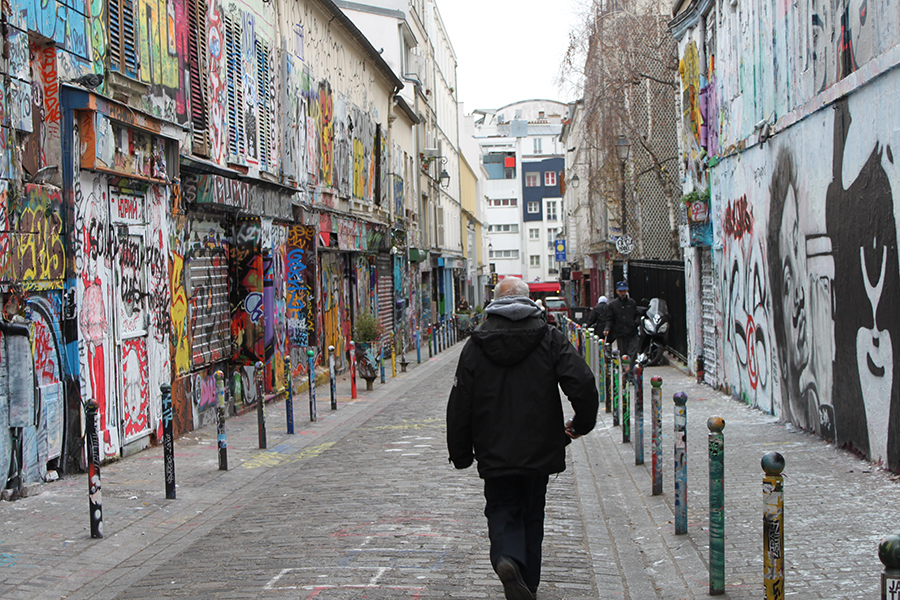 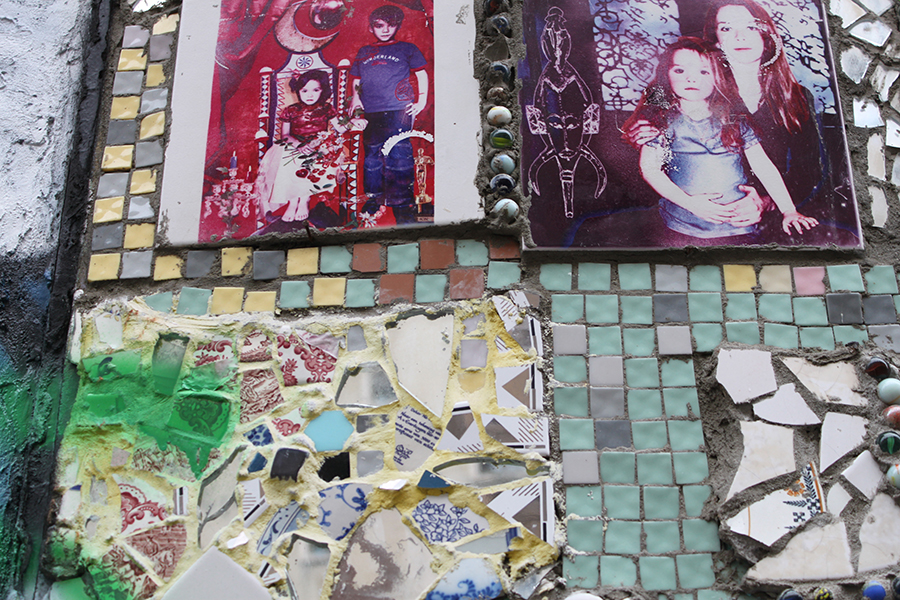 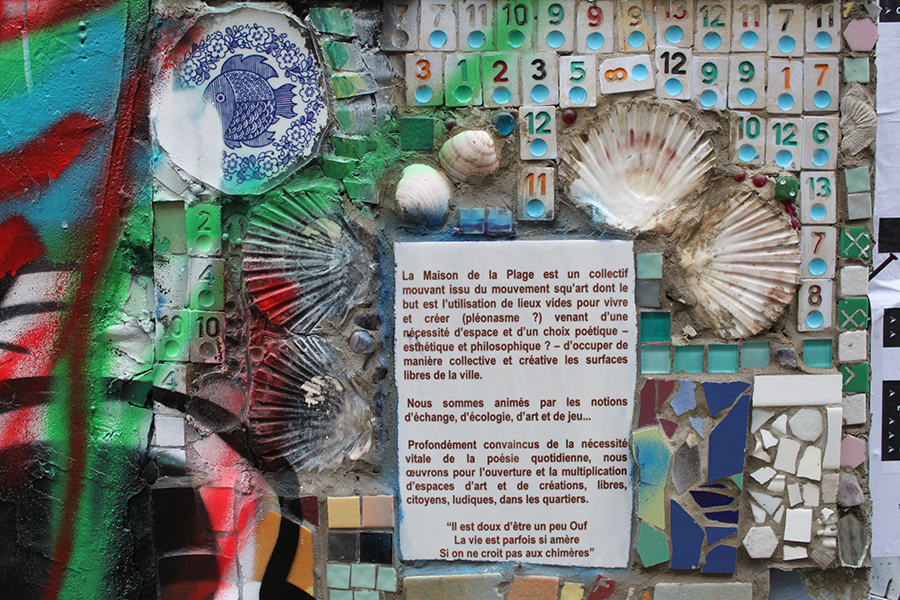 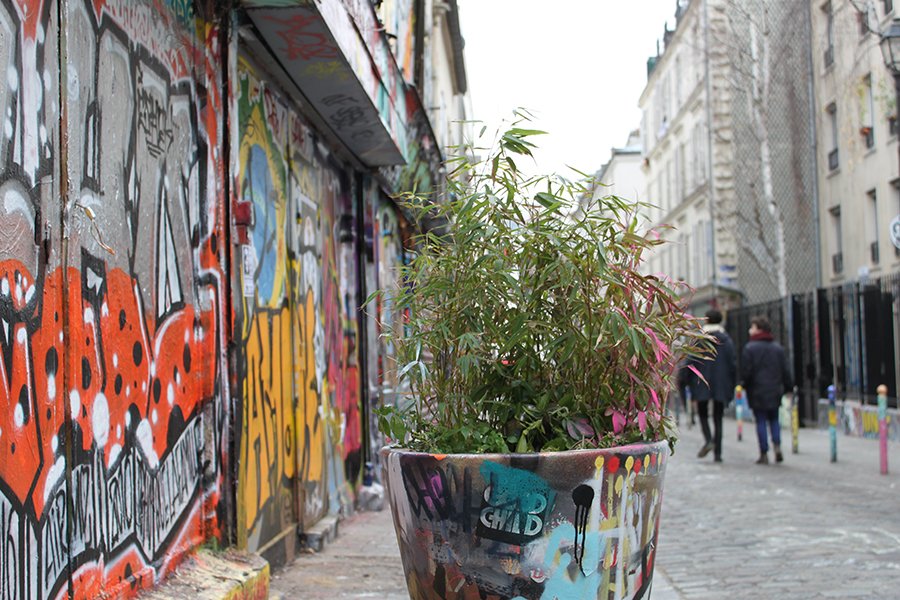 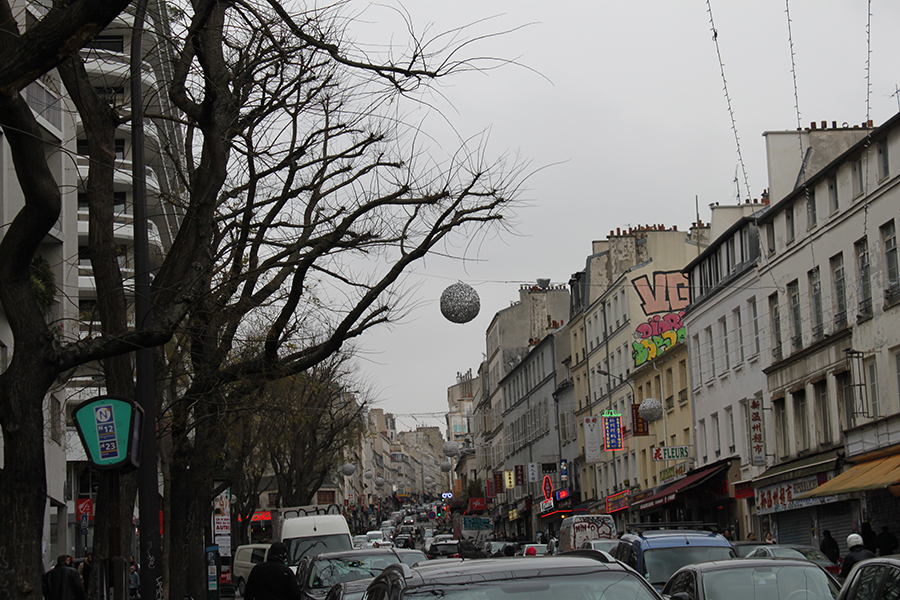 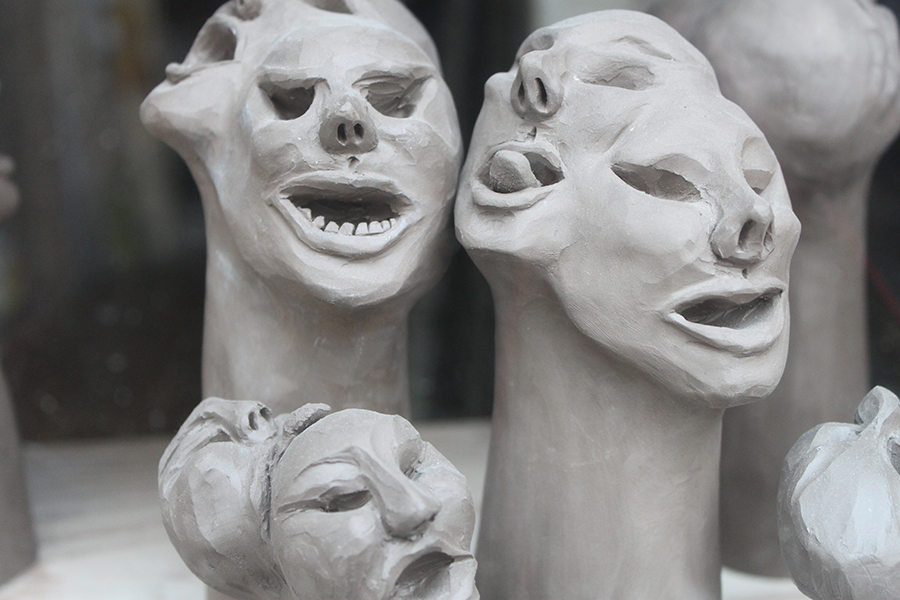 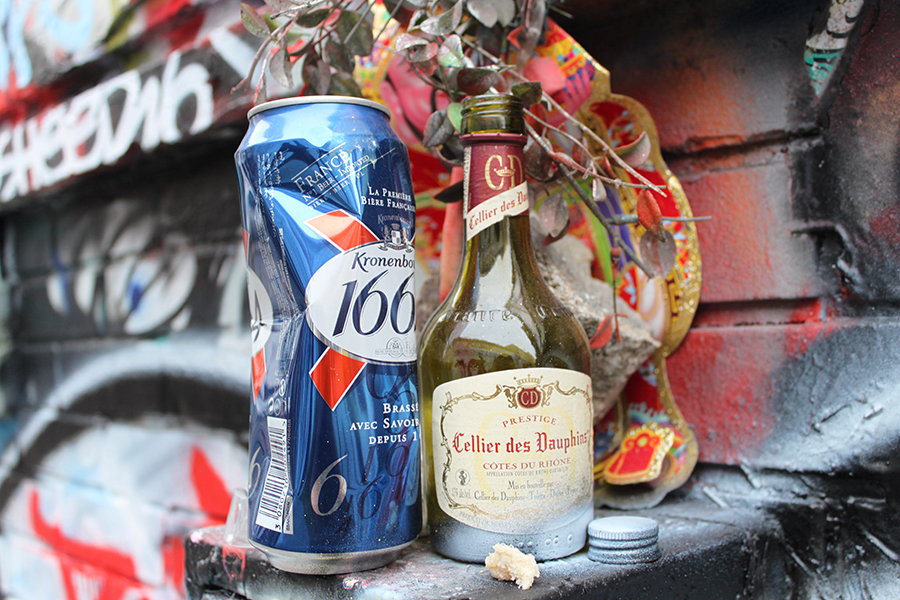 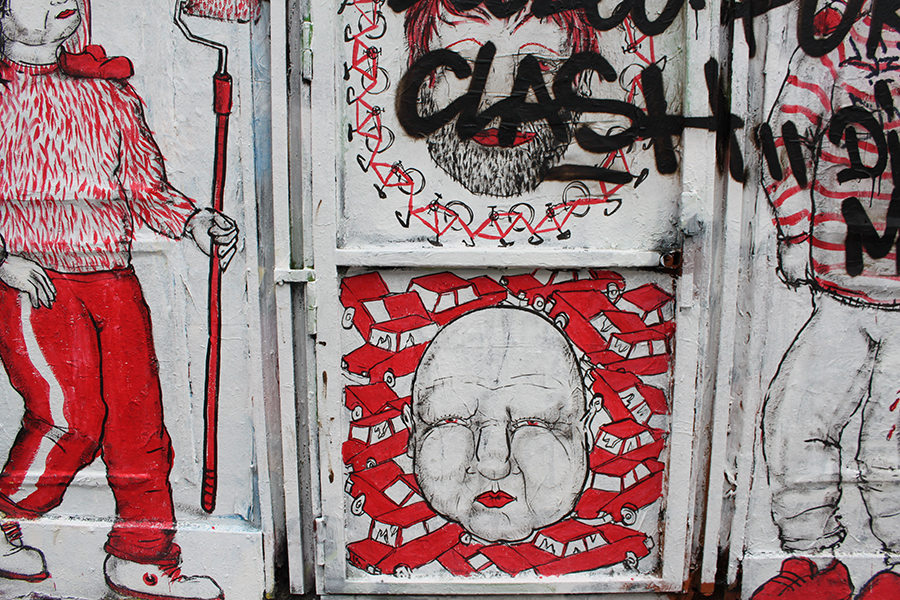 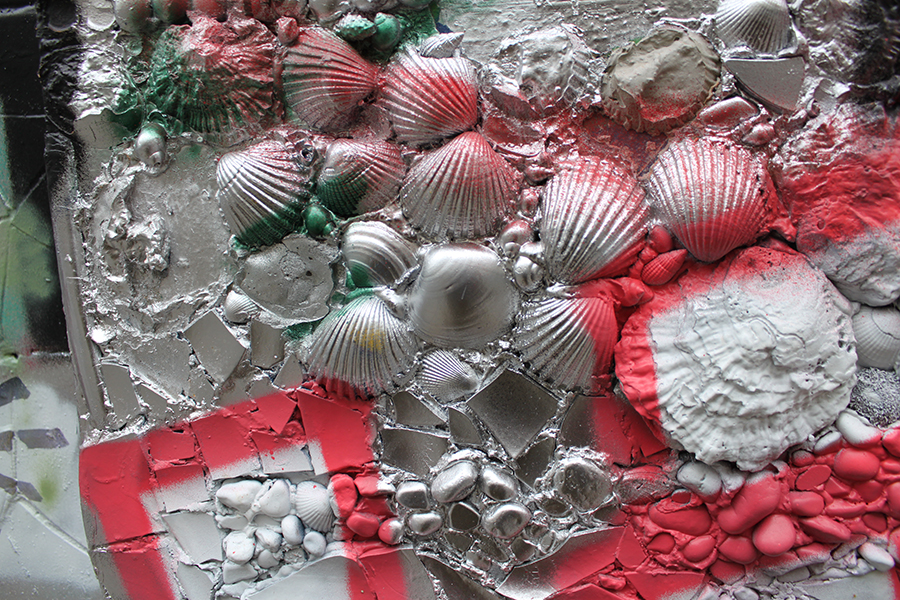 As I exited the Belleville metro stop, soft, cold rain began to fall lightly from the hazy sky. Once on the street, I noticed how erratic and lively the neighborhood felt in comparison to the city center. In the six months I had lived in Paris, I never made it to Belleville. During that time, I operated on a fixed circuit. I would lazily sightsee near my apartment in the 9th, travel to the Latin Quarter for classes, and end my day working for a gallery in Chateau Rouge. Although those six months were my first time in Paris, my desire to explore was overpowered by my desire to make sense of the new settings around me. I unconsciously carved out small worlds to familiarize top to bottom in the hopes of fabricating some flimsy sense of home. In those first six months I felt too obviously different. My neighborhood in Paris was void of any other black lower-middle class residents, not to mention anyone under the age of fifty-five. This change was stark in comparison to the home I’d made in Lefferts Garden, where everyone blends in because no one does. This is not to say Paris is some standardized society that mandates homogeneity. It was simply a new society in which I struggled to find my place.

Upon my return for thesis research, seven months later, the desire I’d had to fit in and understand was replaced my need as a researcher to juxtapose and subvert. I abandoned my divide-and-conquer tactic and flung myself as far as a three-day trip would allow. Under the newly self-appointed title of Ethnographer, I suddenly found myself brave enough to move freely from context to context. I traveled to the suburb of Antony to interview an informal dance collective, made my way to Père Lachaise for an underground art exhibit, and followed a group of strangers I met on the street to a clothing swap on the banks of the Seine. In forty-eight hours, I met people so vibrant, diverse, and honest that my idea of Paris was irrevocably widened. It was then that I realized real sub-cultural artistic agency is found on the narrow, poorly paved streets of Paris, rather than inside its galleries, museums, and cultural centers.

This realization sparked a renewed interest in Belleville. The neighborhood has long been a symbol of fringe society, immigration, and creation. Belleville has been working class since its inception, but what started in the 1920s with Greeks, Jews, and Armenians led to waves of North Africans, Sub-Saharan Africans, and Chinese immigrants settling there. Cheap rents caused artists to follow soon, and now the neighborhood is regarded worldwide as a hub for graffiti and an ideal spot for ateliers. This all-too-familiar narrative caused me to write it off as simply another Bushwick, and despite suggestions from gallery coworkers, I decided the trip wasn’t worth my time. Now as I made my way up the inclined main street cluttered with cars and spice merchants, I took in all that had been waiting this entire time, just out of sight.

On Belleville’s streets African and Chinese cultures fuse to create a visual language rich with contrast. A standard mural form can be observed from afar but on the intimate, small streets of the community an abundance of textured surfaces and layers upon layers of collaging adorn the walls. Everything from ceramic to shells spray-painted silver to coffee mug handles can be found embedded in the walls of Belleville. The DIY aesthetic of collaging and mixed media work found in Belleville counters the stiffness of its neoclassical setting and Paris’ underlying fear of racial secularization. This work speaks to what it’s like to exist along make-shift margins, with its layers of paper and paint revealing what time and history can cover up.

As I walked through Belleville and observed the cohesiveness of tone created by such a mixed community, I began to wonder, beyond heritage and theory how do people conceptualize their identity through their actions? Is this always a question of style, food, or neighborhood choice? While living in Paris, I often found myself wondering, beyond race and class, what forces connected and separated me in my apartment around the corner from the Louvre, the African immigrants in Belleville and Chateau Rouge, and black individuals born in Paris. When I did visit the predominately black neighborhoods in Paris, I often received strange looks before I even opened my mouth. But anytime I was on a train full of white French faces, I would seek out a brown face in the crowd and exchange a smile. We would acknowledge one another because something connects us. And yet because of nationality, and a host of elements beyond my perception, we were worlds apart. While capturing photos and speaking with shopkeepers in Belleville, I kept seeing a group of kids laughing and running down the steeply sloped streets. Finally, I stopped and studied the group. It was made up of three small black girls each wearing a hijab, two young presumably Chinese boys wearing light-up sneakers, and a taller white boy. I wondered if any of these children, most likely born in Belleville, ever felt out of place in Paris. I wondered if they themselves considered the backdrop of their play to be uncharacteristically jumbled. Or perhaps it’s just home.

"Belleville: A Visual Inquiry" was originally created in the spring 2016 course "Creating a Magazine: A Multimedia Approach," co-taught by Professor Lise Friedman and Professor Molly Kleiman.